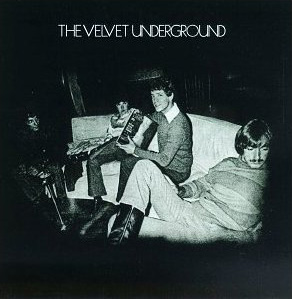 • Buy in Japan
Kim Kirkpatrick: The Velvet Underground’s sound is evident in every rock band that has followed them, or, stated more conservatively, every indie rock group. I will not attempt to review VU’s entire catalog or history. I just wanted to comment on one of their essential recordings (and the one I play most often), The Velvet Underground (1969).

In 1967, their recording debut, The Velvet Underground and Nico, came to our stereos from a dark environment—it carried the burden of hard drugs and desperate lives, and it had a magnetic pull for a few of us listeners. White Light/White Heat (1968) was much louder and harsher—recorded on overload—and really, really intense for its time period. No "Peace and Love" coming from these musicians. And no “Tear Down the Wall” messages either. No political expression was in there; it was personal, lived, and often harsh. The rawness, the aggression of these two releases is often intensified by John Cale’s playing of viola or piano.

John Cale and Lou Reed had very different musical interests, and this is apparent in the first two releases (you might want to give them another listen with this in mind). John Cale, of Welsh origins, had diverse and experimental musical interests. He was classically trained—he had studied with Aaron Copland and performed with John Cage and La Monte Young prior to the forming of VU. Lou Reed was coming from a pop background, with sharply honed skills writing in that genre. Like many highly influential bands (make your own list) that had two strong-willed, creative musicians pulling in different directions, this was to be their strength and a source of their power, but it also lead them to a parting of the ways by the third album.

The Velvet Underground was the band's third release, and the first with John Cale gone, replaced by Doug Yule. The shift could not be more audible: The Velvet Underground never reaches a harsh point. Overall it is a structured, soft, clean performance. Beginning with “Candy Says,” the album presents a slow, late-night atmosphere, performed at a pace suitable for heroin or barbiturates. "Some Kind of Love" and "Pale Blue Eyes" both share with the first track a decadence, deviance, and sexuality that is palpable and not for the timid or "square."

A friend and I were listening to this record in 1969, in his room, far from his parents, as we always tried to be. His mother walked in midway through "Pale Blue Eyes" declaring the music perverted and wanting it turned off. Her reaction from afar was to the slow, beautiful (but admittedly warped) guitar work, and to the slow, tension-filled rhythm. The lyrics were not audible for her. Now that is powerful music—beautiful, sad music. 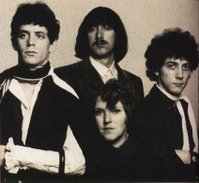 The Velvet Underground from the era of the eponymous album. Clockwise from 6 o'clock: Maureen Tucker, Lou Reed, Sterling Morrison, and Doug Yule, who, by the way, sang "Candy Says."

I have owned four or five LPs of The Velvet Underground, including original issues (Jesus, that crappy MGM vinyl!*), various countries' pressings, and two CD versions. We are now fortunate to have this fine remastered CD available of this recording. At times, remastered releases seem to only fulfill the labels' desire to get the public to repurchase the same music multiple times. The various upgrades for Jimi Hendrix or Bob Marley and the Wailers come to mind. With those, you could hear the change in the mix but I was never convinced one or the other was clearly better—not enough to get rid of one or the other version. This is not the case with this The Velvet Underground remaster. It is far superior to any other releases I have owned, revealing lyrics, guitar tone, bass, and an overall separation I never heard before. Since The Velvet Underground is one of my all-time favorite recordings, the opportunity to hear it anew is a great listening pleasure for me.

*And speaking of Jesus, "Jesus," "Beginning To See The Light," and "I'm Set Free," all in a row, give the listener a VU/Lou Reed religious experience, as well as sustaining the perversity mentioned above—an amazing sequence of songs back to back.


Bob: I just bought the remaster of VU thanks to KK's review. For those keeping score at home, that makes at least five versions for me too.

Kim: Yeah, it makes sense to get this one even if you have earlier versions. This is such an improvement that it will be a new experience for those who are already familiar with the music. And for anyone who doesn't have the recording at all, this is the version to get.
Posted by Mike Johnston at 12:29 PM