Count Ossie and the Mystic Revelation of Rastafari 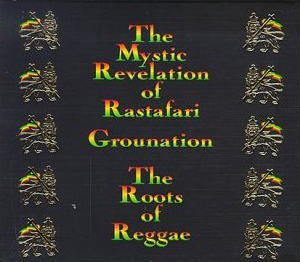 Kim Kirkpatrick: I backed into Nyahbingi* music (it's also sometimes spelled with a second "h," Nyahbinghi) from my pursuit of reggae and dub. I was heavy into Adrian Sherwood’s ON-U Sound label in the early 'eighties, and my long path to Nyahbingi started with Sherwood’s release of Noah House of Dread's Heart

(1982). This was a creative outlet for the percussionist (and former member of Creation Rebel) Bonjo lyabinghi Noah, a.k.a. Bonjo I. The music was sparse, percussion-driven, with ON-U Sound’s heavy and stellar (as in, from outer space!) musical crew and The Heart Choir, a group of children singing harmony. The recording knocked me out with its authenticity, its feeling of righteousness.

This led me into more percussive and sparse reggae music; essential in this investigation were various Ras Michael and the Sons of Negus releases. As we have moved into this new century we have been blessed with many reissues of rare and essential recordings, many from the precious reggae period of the mid- to late-'seventies. Two recordings by Count Ossie & The Mystical Revelation of Rastafari entered my collection this past year. The first was Grounation (1973, included in the release above), said to be his masterpiece, and the other, Tales of Mozambique (1975, currently unavailable again), which I view as no less essential.

Is Count Ossie’s music authentic Nyahbingi? Probably not, though it is clearly grounded in it by his percussion and much of the traditional form. But his music also incorporates many other instruments more expected in a Jazz ensemble—numerous horns, flute, even a clarinet.
I find Grounation, the first release by Count Ossie and the Mystic Revelation of Rastafari, to be more tribal, more African, carrying a consistent feeling of a funeral procession—reverential, with a steady and slow pace. These players are in it for the long haul, for the transcendental possibilities of music. It reminds me of early Art Ensemble of Chicago, Don Cherry, or the initial African material that came out on Nonesuch.

Grounation has a lot of spoken word material by Ras Jose; a good quarter of the release is his narration or poetry. The title cut is just short of thirty minutes and closes out the CD. This track, "Grounation," seems to me to be a true Nyahbingi performance, with its circular, mesmerizing drumming and vocals. Like several of the longer tracks on this CD, it is easy to get lost in the rhythm and chanting, losing your sense of time and environment. This is a good thing, and should be pursued.

Tales of Mozambique is very similar in feeling and often has a similar sparse, African, tribal thrust to much of the material. It differs in greater utilization of more modern instrumentation and arrangements, with more of a blues, jazz, and early reggae feel to it. In fact the first cut, "Sam’s intro," is reminiscent of the start of Coltrane’s Blue Train.** In this cut we have Cedric Brooks on tenor saxophone and Ras Jose on bass, building an uplifting start for the track, followed by piano, bells and the drumming of Count Ossie.

Oswald Williams (Count Ossie) is often credited for bringing African drumming and chanting into the genre of reggae. His numerous appearances on a variety of releases going well back into the early 'sixties helped to blend together aspects of African and Jamaican music. Tales of Mozambique is an intricate blend of many musical forms: jazz, folk, chanting, and even some powerful spoken word by Ras Jose. This is an authentic heartfelt performance, one you could easily imagine taking place outdoors, around a campfire, and going on until the dawn. Musicians, vocalists, and percussion all have their natural space in these open performances, and it is easy to ride any one of these elements when listening.

I have heard people say this is boring and repetitive music, a reaction I can understand, certainly more then the classic buffoonery of saying "All reggae sounds the same." However, anyone drawn to this site knows that repetitive is not necessarily to be linked with boring. Any time you hear or read a comment with "repetitive" and "boring" in the description, it's time to listen and think for yourself.

For me this music communicates spirituality and authenticity. It requires you to slow down and embrace the atmosphere it creates. It has a calming, reverential effect on any listener able to grasp the heaviness and mood of the music.


*Nyahbingi, as I understand it, is deeply connected to the Rastafarian religion, and is to be played only by true believers. It incorporates a trio of drums, the Thunder, Funde, and Repeater, all playing in 4/4 time, a heartbeat rhythm. You can learn in far more detail about not only the role of each drum but also the politics and religion connected to this culture, and its music, at this site.

**Another clear connection to be made, both for its spirituality and transcendental nature, is the musical link to Alice Coltrane's Journey in Satchidananda