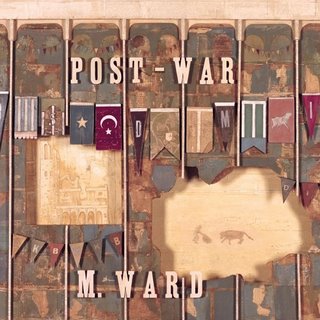 • Buy in Japan
Mike Johnston: As the designated-by-default pop music guy of our group—I'll be looking at pop acts like the Decemberists, the Shins, Neko Case, and the Fiery Furnaces, and I doubt the others will—I feel a little sorry for M. Ward. In the context of the kind of music we review here, he's as pop and mainstream as music gets. His songs are tuneful unto being beautiful, his arrangements skilful unto slickness, and he's almost too good a guitarist for anybody's own good. Yet consider the bizarre spectacle of real pop music in the waning Bush years: white-washed gangsta-rap meets American Idol in a shower of shiny bling and the shadow of balance sheets. And in that context of Jay Z, Clay Aiken, and that coarse woman who feels that publicity is well served by flashing her pudenda disembarking from cars, M. Ward is "fringe"—"faggy"—"weird"—"avant"—"out there" (all terms I've heard applied to this actual record by actual people. Well, actual online personae, at any rate). A guy can't win. Fiction might be strange, but truth is stranger still.

In the Murka of my imagination, M. Ward is a superstar and Post-War is bigger than Jagged Little Pill. Post-War got my vote as the #1 best record of 2006, and I love it to death. Already, it's achieved that rare Blood-on-the-Tracks status with me—a record that's cohesive and whole and true to itself from the first note of the first cut to the last note of the last cut. Every time I listen to it, I listen straight through. It's about lost love, times past, impending death, luck, growing up, growing old, and promise. All subjects near and dear to my own art. A romantic album, in the best sense of that adjective.

Have at M. Ward if you will, but nobody's allowed to say anything bad about Post-War. I'd have to stuff my fingers in my ears.

Bob Burnett: Au contraire, my auditeur. I recall falling all over the place over The Decemberists' "16 Military Wives" a bit back, like the 12-year-old I once was hearing Neil Young and Crazy Horse do "Cinnamon Girl" for the first time on an AM radio. A few D.C. friends of mine, Brendan Canty and Christoph Green, have released the third DVD installment of their excellent "Burn to Shine" series

and it has a wonderful performance by The Decemberists (as well as other Portland-area bands). I have not heard the fabled M. Ward album but know Michael has been smitten. Repeatedly.

Albums that tend to slay with such force tend to offer expansive offerings.

Mike Johnston: Two girls I went to college with who were roommates and great friends had a permanent rift over that record. Corrina (her name was Marina but she called herself Corrina after the song by Taj Mahal) would just throw on a record when she came into the dorm room and crank it up, then leave with the music still playing. Ellen was shocked when she did that with Blood on the Tracks because Blood on the Tracks was sacred to her and she wanted to be able to "save it for special occasions." Corrina said she could listen to whatever she wanted to, whenever she wanted to, because it was her room too, and her record, and off they went. The fight went on for weeks and they never made up, as far as I know. I do believe it was a religious incompatibility, now that you mention it.

I admit I love Blood on the Tracks too (it's saved from perfection by "Lily, Rosemary, and the Jack of Hearts," which I think Dylan decided to try to improve by making longer—it didn't work), but I always make that "holy record" association because of Corrina and Ellen and their fight over it.

Back to Post-War, though—I listened to it again today "through someone else's ears," that is, imagining how someone else might "hear" it as being too slick, too poppy, predictable. I guess I can see now how someone else might not be grabbed by it, or might turn away from it. It didn't grab my friend Mr. Hill, which is sort of a sore spot. But really, I think it's a remarkable tight-wire performance in terms of how it's "pitched." It retains a feel of spareness in the production despite being surprisingly deep in instrumentation. M. Ward's voice, with its distinctive raspiness and characteristic "meh" intonation, retains an alternative feel, but he actually has an excellent range, and just listen to how he bends the blue notes ("I know when everything feels wro-ong," from "Post War" (the song)). The supergroup turns fit in absolutely seamlessly—Neko Case's appearance, the choice of the Daniel Johnston song (I first heard of M. Ward because of his fabulous rendition of the infinitely sad "Story of an Artist" from the The Late Great Daniel Johnston

). And I love the shortness of some of the songs...it gives them that casual, tossed-off, impermanent feel radio songs had when we were kids (I remember Ray Davies saying in an interview something like, "Who knew these songs would last forty years? We thought they'd last four days"). If M. Ward never does anything else (alarming thought!), he's earned a place in the pantheon with this release. I could talk about it all day. Of course I'd rather listen to it than talk about it, but it's sacred, and I'm saving it for special occasions. Heh.
Posted by Mike Johnston at 9:02 AM