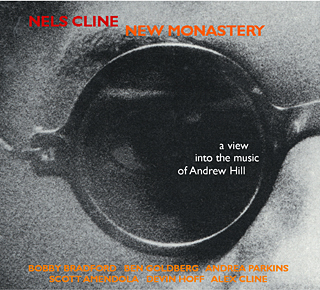 Bob Burnett: If I was the type to have a guitar guy at the moment then Nels Cline would be the guitar guy at the moment for me. (And if you buy Kim a Duvel he'd probably say the same thing.) To his credit he never seems to be identified by one genre, style, or pattern of playing. Therefore he makes it possible for me to buy with assured confidence many different releases and always look forward to whatever it is he capably conjures. You like freeform soundscapes? He's got it. Progressive rock inspired by Gentle Giant and Peter Banks? All over it. Power Trio? Uh huh. All on the same release? It's known to happen. On New Monastery he reconstitutes music composed by pianist Andrew Hill

, who is a Blue Note label stalwart. I say reconstitution because he uses the compositional form of Hill's music but plays it as someone who has spent time with Hill's recordings as an inspired listener and not just a sheet music recycler. He interprets the music with his ears and heart, uses it as inspiration for his own directions and comes away with an incredible effort.

Along for the ride are Bobby Bradford on cornet, Tin Hat Trio (an amazing band in its own right—stay tuned for a review to come) member Ben Goldberg on clarinets, Andrea Parkins on electric accordion, Devin Hoff on bass, Scott Amendola on drums and Alex Cline on percussion. To me this is an important album solely due to the inclusion of an accordion, one of the greatest instruments in the world. (You wonder how I could say that? Stick around for future reviews.) And in the hands of Andrea Parkins an instrument of expanded capability. This band is bobbing and floating. Sharp, frenetic, open, energized. Really. No kidding. I love when music gets this exciting and rollicking. I've experienced energy like this live and on records by people like Henry Threadgill, Marty Ehrlich, Steve Lacy, and recently Ned Rothenberg.

I also appreciate that Nels hopes this album inspires listeners to delve into Andrew Hill. I know I did. I had one or two of Hill's albums and now have half a dozen. Hope it works for you too.

Mike Johnston: This record is really an amazing ride. It can be massively atonal, raucus, yet never outside or out of control. During Compulsion I felt like a guy sitting quietly in a car being dragged by a train. The bass player held the slower cuts together for me. It's like he was the stitching that held together the logic of the arguments. Even in Not Sa No Sa when the drums come snappin' in it's the bass I laser in on. I wish I could hear him better—it may be the ridiculous little computer speakers I happened to be using. I need to hear this on the big rig. Thanks for leading me to this, Bob. I stayed up ridiculously late because I just couldn't break off listening. Where can you break off? It's like you have to hear the next thing they have to say. I literally leaned in listening.
Posted by Mike Johnston at 1:51 PM