Bob Burnett: As reported on Alex Ross' site (fyi--bookmark it and read it! Great range of classical/contemporary information, sound files, etc. and a video that shows his enviable music and book collection) Deutsche Grammophon has opened up a download shop. For roughly $1.29 per movement (or $10-$12 for the whole piece) you can download high quality 320 kb/second files. I haven't looked too closely at the available selections, but given some of the Karlheinz Stockhausen DG prices I've seen for CDs (upwards of $40 at times for two disc sets) I'd say this site is a great way to explore the DG catalog at a reasonable price. Plus, they tout the digital re-release of 600 albums from their back catalog that were OOP. Hopefully Stockhausen's DG version of Hymnen will make an appearance as a download too. My maiden voyage found me downloading Gyorgy Kurtag's composition Stele---terrific sound quality and performance.

Speaking of Alex Ross, I spent the better part of the day travelling on airplanes reading his excellent (and just released) book The Rest is Noise: Listening to the Twentieth Century. The title speaks for itself. I found myself skipping all around it today too impatient to read it in a linear manner. I did read the first 50 pages or so about Richard Strauss and Gustave Mahler before jumping around to Cage, Stockhausen, Schoenberg, Webern, Reich, Copland, Berg, Stravinsky.....etc. Highly recommended.

Posted by Bob Burnett at 7:26 PM No comments:

Colleen - I'll Read You A Story

Here's a nice surprise I stumbled across this evening by sound collagist Colleen (aka Cecile Schott). Colleen records on the Leaf Label which is based in Leeds, England. This selection is from the album Colleen Et Les Boîtes À Musique. The video was made by Jon Nordstrom.

Posted by Bob Burnett at 9:44 PM No comments:

Bob Burnett: I went on a bit of an acoustic guitar tear over this long weekend thanks in part to my friend's (thanks DROP!) suggestion that I check into the world of Sir Richard Bishop. Bishop is known as one of the members of Sun City Girls but also has a quite impressive solo career going. Over the weekend I've picked-up three of his albums: Salvador Kali, Improvika and While My Guitar Gently Bleeds. One of the reviews on emusic said Bishop's playing sounded "like a retarded child fumbling aimlessly on an acoustic guitar" which immediately made me thing "Wow! This must be great!". I like his hard, plucky improvisational sound, his Robbie Basho-inspired extended raga meets blues modal approach and his willingness to go "out" of key and push what he's doing--he even pushes the supposed boundaries of the Django Reinhart tradition! Thank goodness his playing is not safe at all and because of that makes for great textural and dynamic music.

Another acoustic player I've been really enjoying is Glenn Jones. I first became aware of Jones due to his playing in Cul de Sac. Their album ECIM is an essential get by the way. Jones has two John Fahey-tradition solo acoustic albums I know of: This Is the Wind That Blows Out and Against Which the Sea Continually Beats. Jones has a softer, more elegant sound than Bishop. I'd call it more refined if that was something that advanced the description. These are meditative finger-picked perfection albums. Granted, they are well-groomed but not glossy. I find them both to be easy to have on, beautifully played "sunrise music".

Finally in the out there and intriguing catagory is R. Keenan Lawler's Table of the Elements label release Music for the Bluegrass States. Lawler plays what is called a "resonator guitar" to create avant garde bluegrass abstractions. This music is spare, open, drifting and very interesting. He finds strands of "tradition" and breaks it apart. He skillfully takes what would be a two minute composition, opens it up and somehow makes it a completely interesting upwards of 25 minutes worth of abstraction--as heard in the winner of the c60 Sun Ra-like song title "The Air on Mars is Hard to Breathe, We'll Just Have to Stay in Louisville" . John Cage's Sonatas and Interludes, Eugene Chadbourne's acoustic textures for solo guitar also shine through for me. One reviewer said Tony Conrad meets John Fahey. Hmmmm. Okay. I'll accept that. He has a nice myspace page going that offers the chance to explore a bit.

Bobby Previte Get 'em While They Got 'em

Bob Burnett: I just noticed that c60 fave Downtown Music Gallery has gotten together with composer/percussionist Bobby Previte to put up for sale a large offering of Previte's work. Apparently this stack of discs are from Previte's personal holdings and contain several out-of-print selections from the '90s Gramavision and Enja label work he did. I highly suggest his Weather Clear Track Fast group; an intense and skilled septet (including Robin Eubanks, Marty Ehrlich, Don Byron) with abundant skills in improvisation, complex rhythm and happening melodies. It's downtown NYC meets Ellington. Go to DMG's site and delve into the list of offerings.
Posted by Bob Burnett at 5:07 AM No comments: 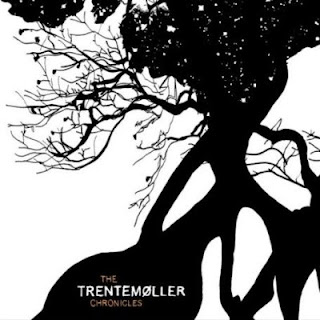 Bob Burnett: When we first started c60 Kim wrote about Danish composer/producer Anders Trentemoller's first album The Last Resort. It's an album I've grown to want to play practically all the time and find myself recommending it to people on a regular basis. Now, I have a second Trentemoller set to suggest---The Trentemoller Chronicles. Yes, there's some overlap with The Last Resort but only in the form of re-mixes such as "Moan" which takes on a whole new life with stunning vocals by Ane Trolle on Chronicles--check out this clip of a live gig for an idea how "Moan" has evolved over time since appearing on The Last Resort. Chronicles works more like a compilation or a pulse-taking at the wide range of work Trentmoller is involved in--recording, producing, remixing and performing.

Chronicles also includes a second disk that features Trentmoller specifically as a re-mixer. Moby is included among the featured remixes. I'm just starting to delve into that disk because I just haven't been able to get past the first disk--I'm in serious repeat listen mode. The music segues beautifully from cut to cut. There's a layer-upon-layer complexity to all the compositions but throughout remains incredibly clear and listenable. I keep thinking how perfect it would be if he were to do a Bourne movie soundtrack. There's also an interesting Trentmoller re-mix on emusic called Chapter One by Djosos Krost. The cut brings together Thomas Brinkmann-inspired beat collage with dub vocals. Trentemoller keeps the whole thing together with his thoughtful mix. By all means scoop up all the Trentemoller you can find--and look into his myspace page for more cuts and info.
Posted by Bob Burnett at 8:03 PM No comments: