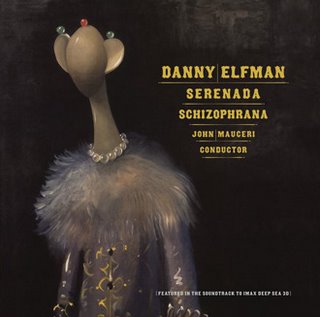 • Buy in Japan
Mike Johnston: Wow—when the composer of the deathless "Simpson's" TV show theme music puts out a piece of Serious classical music, you just gotta listen. (I wonder sometimes why more composers don't do something for all those big ol' classical bands sitting around all over the world with nothing to play but old crap.) This is big Classical, too (note second use of Capital Letter) not just bone-for-dog tossed-off stuff. It's, like, a Piece. (Note....)

Elfman is very skilled (way slicker than, say, Sir Paul's assays into the orchestral soundworld) but I find I like it a lot less than I wanted to. It's like a cross between 19th-century bombast and film music (I guess it actually is film music, for an Imax film), with—oddly—a bunch of repetition cues from minimalism thrown in. Lotsa different instruments—percussion—an opera singer—a glockenspiel! Like I say, wow.

But not much new. I dunno, saying this kinda makes me feel like a big hopeless lump of shitty critic. Elfman has more musical talent in his split ends than I have in my entire life, and so who am I to criticize? No-bod-dee. But this won't get a lot of time in my player's drawer, I'm afraid. Way too much going somewhere and not nearly enough getting there for me. Set to animation maybe....
Posted by Mike Johnston at 12:59 PM