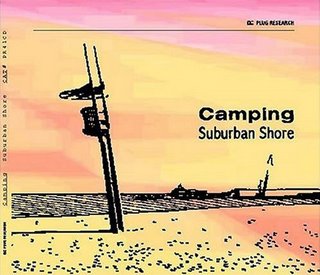 • Buy in Japan
Bob Burnett: Camping is what happened when Henning Fritzenwalder got with the sounds of the railways-inspired Chessie duet of Stephen Gardner and Ben Bailes to create bossa "nova express" soundscapes. They successfully bring together soft, clave-inspired rhythms with masterful electro-acoustic washes and textures. Fritzenwalder’s singing is in German instead of what you may have come to expect to be traditionally in Portugese or English but it works well because his delivery has that gentleness and reeled-in vibrato essential to the genre of bossanova. I read several positive reviews of this album on a few sites but there’s this want to focus on the strangeness of a German doing something in this niche. I’m a bit befuddled by this, because Germany has brought us decades of creative and warm electro-acoustic music: Neu!, Cluster, Conny Plank’s overall studio sound, AGF, Thomas Brinkman to name a few. (In fact Kim and I were both talking about the need to introduce Thomas Brinkmann to this list and I’m already queuing up AGF.)

I keep flashing to Antonio Carlos Jobim’s composition "Dindi" (one of my personal favorites) at every turn but these players really figure out how to make the melodies and layers their own. And speaking of their own the recording is really top notch—attention to the details, tasteful layerings, creative use of timbre, and a much appreciated retention of the natural ambience of the instruments within the natural space of the recording studio.
Posted by Mike Johnston at 9:43 AM