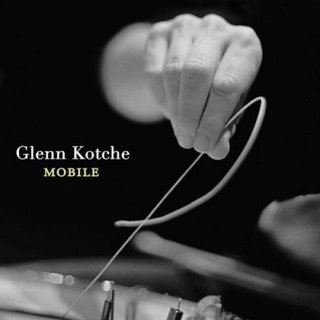 • Buy in Japan
Bob Burnett: Known to many listeners as one of the new guys in Wilco when their legendary Yankee Hotel Foxtrot

album was recorded, drummer/percussionist Glenn Kotche's solo Nonesuch label debut, Mobile, is comprised of eight original compositions that, in addition to being a landscape of creative possibility, offer a chance to discover how outside influences have had a broad effect on his playing and composing as well as how his skills and dedication to the craft of musicianship influences those he plays with.

Plenty has been written about Kotche's ability to tap into other composers and percussionists who influence his playing—namely Steve Reich as well as Ed Blackwell and Fela's legendary Tony Allen. I think this is an effort beyond being just an homage to whomever Kotche admires; it's an example of diligent study and exceptional technique. Kotche joins great drummers who tell stories with their playing. In addition to Reich, Blackwell and Allen I consider Gerry Hemingway, Milford Graves, Jamie Muir, Tony Oxley and Paul Motian as mainstays. I'm also thinking of Max Roach on the hat Hut duet and live recording with Anthony Braxton (One in Two, Two in One

Mobile, as complex and layered as it is as a recording, is currently being performed by Kotche live and solo. Kim and I had the great pleasure of seeing Kotche perform live at the Black Cat in D.C.: stunning creativity. Plus, it says a lot to me that he's willing to put himself out in a solo context considering Wilco is becoming a band able to play larger venues, with increased "wooohooo" audience "participation." But, Glenn's not a rock star, he's a player of music. I have to think that it's no small accident that Wilco's musical directions, critical success, and popularity have grown exponentially not by accident or clever marketing, but in large part—in huge part—due to Glenn Kotche's and Nels Cline's inclusion in the group dynamic.
Posted by Mike Johnston at 7:52 AM