Posted by Bob Burnett at 2:56 PM No comments:

The Honeydrips: Here Comes The Future 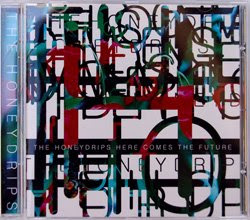 Kim Kirkpatrick: The Honeydrips is a recent release on the Swedish label, Sincerely Yours. The band is actually the work of one man, Mikael Carlsson. He is clearly a musician who has heard a lot of contemporary music, an informed artist, which is a plus in my opinion. And if you’ve been missing the music of the Sarah Records Label, well, skip my review and buy it now. The Honeydrips’ rock with a driving beat and pace like The Field Mice or The Orchids, and go twee like Brighter and St. Christopher. Much of the music is soft and sweet, and most all of the songs are recorded with a huge and cascading reverb atmosphere. More then half the songs have a dance beat to them, along the lines of New Order* or Trembling Blue Stars, very catchy, get-stuck-in-your-head pop.

Carlsson’s vocals seem spoken, average, in a way that I like. Not a great singer by some standards but he sounds real and unaffected…well he does have a few British-accentuated moments, and is assisted on a few songs by wispy, heavenly female vocals. Acoustic guitars chime throughout, chorus-affected electric’s jangle; some nice distorted bass is on a few songs as well. On “The Walk” for instance, it starts with an insistent, sparse Motown beat, in seconds a giant tambourine and bright, crystalline guitar start up, and all is ready to roll when the fuzzy bass and cavernous lead guitar add their touches. The melody of this song and many, many others are so catchy they will plant themselves in your head for hours. That is the sign of excellent, pure pop, and Here Comes The Future reminds me of many a British band from the 'eighties and that ever-changing scene of catchy singles you’d overplay and then move on.

While many an indie pop band from past decades could me name-checked here, The Honeydrips’ music is more then just a recreation. Mikael Carlsson’s music is informed by the past and formed into an intricate 21st Century blend of beats, softness, and rock. It is a pleasure to hear The Honeydrips—fun and smiles quickly surface for this listener.


*Carlsson even brings a much-loved New Order melody into "It Was A Sunny Summer Day."
Posted by Mike Johnston at 4:38 PM 5 comments: