Guster: Ganging Up on the Sun 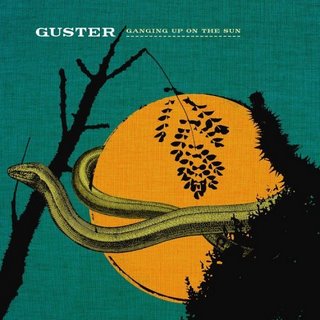 • Buy in Japan
Bob Burnett: OK. I’m treading into an area that is a critical challenge. I’m writing about a group I know little about beyond a few basic things. Also, being traditionally known to my c60 pals for gravitating towards being the voice for freeform “here I stand, jacket over my shoulders, holding a Galois, wishing my hair looked liked Bernard-Henry Levy” intelligensia music guy, I’m attempting to log in on a pretty straight-ahead, somewhat popular group.

A friend of mine told me about Guster. He’s a professional musician and began his tale of Guster this way: “My 17-year-old daughter was listening to it…and usually I’m like, you know…ehhh...when she’s playing things. Well…my ears turned to Guster and said—wait a minute….these guys are good.” I also mentioned to a 25-year-old work colleague that I had been “listening to an album by some band that started in the Boston area….starts with a G…I dunno…pretty good.” She, being from nearby New Hampshire, immediately, enthusiastically shouted in her New England Fenwayese, “GUSTA! Yer listenin’ to GUSTA!—I LOVE GUSTA! Been listenin' to 'em since high school!”

So there you have it. Two positive set-ups. To me the “big” songs are at times too big, the quiet songs too falsetto and somewhat cute, the guitars kind of crashy, but they are really good at being a big-crashy-at-times-falsetto band. I completely see being a long time devotee to them. In times when many "pop" albums sound assembled, this one sounds played. It was recorded in Nashville, features a diversity of instruments including lap steel guitar, banjo, dulcimer and trumpet. The lead-off song, “Lightning Rod,” really is what makes you tap into what's going on. It's a lovely, well put together song. It must have been the one to turn my guitar-playing friend’s head towards his daughter’s room and say, "hey...this isn’t Fergie…."
Posted by Mike Johnston at 5:48 PM