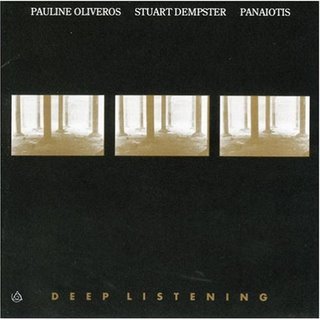 • Buy in Japan
Bob Burnett: On Deep Listening, The Deep Listening Band (known then as trombonist Stuart Dempster and accordionist Pauline Oliveros, along with voice and sonic cohort Panaiotis) recorded within the extraordinary acoustics of the Fort Worden Cistern in Port Townsend, Washington, a cavernous underground water tank that has a natural 45-second acoustic reverberation time. The band climbed down a ladder into the cistern, instruments in tow (in addition to the accordion and trombone, didgeridoo, conch shell, garden hose, and metal fragments) and produced four compositions of lasting fascination.

The Deep Listening Band’s long-working relationship has made them masters of overlapping, elongated reverberating sound compositions. In this case, the ability to tap into the magical possibility within the cistern only advanced their ability to create meditative interplay. This album consists of four distinct environments ranging in duration from ten minutes to twenty-five minutes. 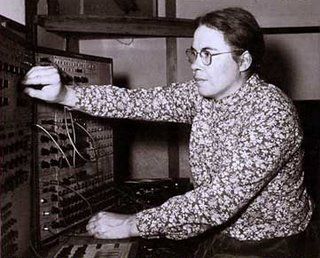 Pauline Oliveros has been working in music and sound since the early 1960s. She has created in several disciplines including early works in electronics/tape (“Alien Bog” for example) but to me, her strongest and most identifiable work falls within the Deep Listening Band context. The term "Deep Listening" is a patented trademark of the Pauline Oliveros Foundation, Inc. "For me, Deep Listening is a lifetime practice,” she says. “The more I listen, the more I learn to listen. Deep Listening involves going below the surface of what is heard and also expanding to the whole field of sound whatever one's usual focus might be. Such forms of listening are essential to the process of unlocking layer after layer of imagination, meaning, and memory down to the cellular level of human experience."

by Evan Parker and the Swiss improvising wind instrument quartet September Winds. They first joined forces in 2000 for a three-day session in (you guessed it) a disused water cistern near Zürich, Switzerland. (That album is currently unavailable.) Alder Brook occurred two years later in the similarly resonant acoustics of the Kirche Erlenbach, a protestant church near Zürich. Evan Parker is known mostly for his solo saxophone playing focused on circular breathing and overtones. On this album he expands his trademark sound to add the layers possible within the accompaniment the September Winds offer.

The Deep Listening album was originally released in 1989 and has been hugely influential to others who create music that brings into account acoustic environment as a crucial element in the understanding of sound. As I listener I find great benefit from the slowly evolving, beautiful sound created by the group. 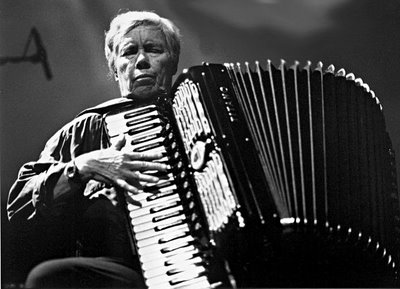