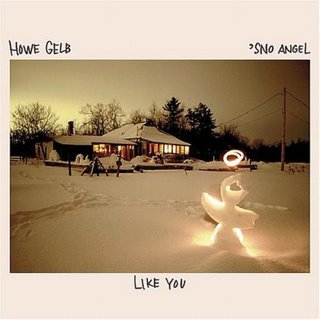 • Buy in Japan
Mike Johnston: The world is still an okay place so long as there are people like Howe Gelb in it. (That, and things like something else I just found out: people who live in trailers have an annual gathering called "Trailerpalooza" in the Florida Panhandle. Don't you just feel better knowing there's a "Trailerpalooza"?)

This breezy, tuneful, enjoyable album somehow reminds me of a record the Grateful Dead put out years ago with themselves dressed as the BeeGees on the cover, in all-white suits, with fake smoke and fans blowing their hair back, '80s model style, bemused smiles on their faces: 'Sno Angel Like You is an extended musical statement that seems to say, hey, why can't I be popular? 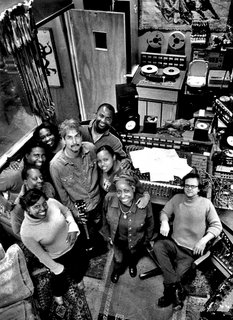 That Grateful Dead release led to Jerry Garcia making one of my all-time favorite art quotes: "We'd sell out, if only we knew how." (Bro!) From what I can tell, Howe Gelb doesn't know how, either. That doesn't stop him from having fun trying: he's joined forces here with a gospel choir.

Left: Howe Gelb and the Voices of Praise Gospel Choir

Before you run from the room screaming "gimmick," hold up—it works. Really well, actually. The songs still have typically Gelbian lyrical turns ("Maybe your bank account / Is not the right amount" or "Go 'head and make yourself a clean sweep / You ain't a bear, you don't need that much sleep") delivered in his lying-around-stoned voice, and there are places where he can't help but play with sounds, like at the end of "Get To Leave" when he makes a dopey "Wha—?" noise with the guitar and the choir laughs. But overall the songwriting lends more countryish flair than the choir adds of gospel.

I don't mean to imply that the choir doesn't fit in well with the songs—for all his offbeat tendencies, Gelb is a seasoned songwriter with effortless powers. He's on good behavior here, "writing pretty," merging strong countryish inflections with lots of stylistic echoes (it's not hard to hear J. J. Cale in "The Farm," to name just one), and the choir is expertly, and surprisingly conventionally, deployed; he never mackeral-smacks you with it. But there are lots of places where the choir seems almost like a chrous, as in Greek drama, playing back off of the lyrics, commenting, providing counterpoint. (That's my read, anyway. If that seems too sententious, the other thing it made me think about was years ago when Howard Stern started getting complaints about a whiney noise he sometimes made, so he hired a group of helpers to do nothing but make the same whiney noise, on cue. I'm talking just conceptually here, not sonically—the Voices of Praise sing very nicely.) Anyway, it's a gently humorous delight to listen to Howe setting off on his zany lyrical perambulations and having the earnest, eager chorus follow him along. It frequently makes me smile, and sometimes laugh.

Of course, it was Kim who introduced me to Howe Gelb, in a roundabout way. Ten years ago or so, with my audiophile hat on (it's a ten-gallon cowboy hat, with white lanyard stiching around the rim of the brim—never mind), I got the itch to buy a new super-dooper turntable and some new vinyl, and Kim suggested I send a bunch of money to George at Vinyl Ink in Bethesda and let George choose a pile of records for me. One of my favorites among the things George sent was Hisser (no longer available), a dark, challenging album with Derek Bailey song structures and not a whole lot of music in the music. By comparison, 'Sno Angel Like You is cheerful, fun, accessible Howe Gelb, with lots of mainstream sounds, and songs that come within a stone's throw—well, two—of being playable on corpo-radio. But it's still Howe Gelb, so all is okay in the world tonite.

Incidentally, I sometimes can't help but think about things in pairs, and in my mind this record goes great with Post-War.
Posted by Mike Johnston at 9:50 AM