"Alice in Wonderland" by Lorna Clymer

Here's a special guest post by c60 friend Lorna Clymer. She was kind enough to submit this look at "Alice in Wonderland" when c60 was more slothlike than a hookah smoking caterpillar. 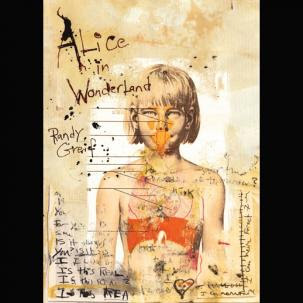 Alice is back. In fact, Alice will always return, again and again. Lewis Carroll’s Alice in Wonderland, first published in 1865, can’t be exhausted by one reading, one interpretation, one retelling. Like any complex and mysterious work of art, Alice endures because it’s durable—each era’s readers can pull on it, bounce around in it, and extract meaning from it. It then snaps back, ready to be pulled and stretched some more.

A rendering or retelling of anything this durable can be an artistic—even cultural—event that then lives on with a life of its own. If it’s first-rate, it can be so compelling that our understanding and memory of the original is changed forever, as if distinct layers were applied to the original, and we can’t ever get them off again. The classic illustrations John Tenniel did for the first edition of Alice continue to exert their own influence. When we see Tim Burton’s revisionary live-action Alice, we might applaud or reject his liberties with plot, but our first reaction to Johnny Depp’s fluttering Mad Hatter is to compare this rendering to Tenniel’s or to another iconic image that preceded Burton’s—from Disney’s 1951 animated version. Such renderings, once experienced, become lodged in one’s memory.

Recently re-released after almost a decade, Randy Greif’s Alice is back. This version makes audible and vivid Alice’s wry, disturbing strangeness. One voice (or is it two?), changing to fit different characters and the narration itself, delivers the spoken passages, which are direct from the original text or changed only slightly. Words are linked with rhythmic, often distorted patterns and looped sounds. Greif puts into sound Alice’s deadpan presentation of a surprising, threatening world that can suddenly seem askew while apparently running like clock-work on its own peculiar laws and customs. This world has mind-bending and body-altering properties, in which a girl can become suddenly uncertain of her identity, or get infinitely tall or perilously small, just by eating or drinking or holding a seemingly innocuous object. This world is packed with logical puzzles and silly puns, with weird situations that seem to be spring-loaded with social traps, and with events carefully managed according to rituals that are meticulously observed, and vigorously insisted upon by imperious figures, but are ultimately absurd. The peculiar world is finally explained away as having been found “only” in a curious dream. But like all good dreamscapes, it can seem a great deal more real than much of so-called regular life.

Over a long career, Greif has mixed musical and verbal elements in many projects, labels, and collaborations. For example, Fragment 56 is spooky, often highly rhythmic, and satisfying. Verdi’s Requiem and War of the World [not Worlds] both show how Greif uses established works as a foundation for acoustical unions. Alice may be his masterpiece.

Alice is monumental: six hours, five CDs, 60 tracks. Who has time for a six-hour work? After 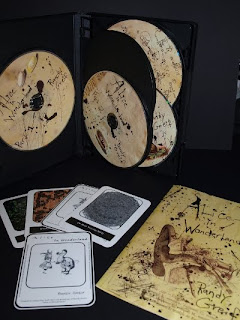 listening to only a few tracks, you’ll find the time. Because this project first appeared in installments 1991-93 (on Staalplaat, in a very limited release), a CD at a time, tracks initially released together have at least a faint resemblance, but all cohere as an inventively varied sequence. For this reason, and because Greif’s Alice follows the original narrative with only a few liberties, don’t download this work from a site like Zune (where fortunately it has been available for some time between the two re-releases) and allow the order of tracks to be reorganized by “most played.” Keep them in their original sequence if you can. The many acoustical layers can get disappointingly flat on an MP3 player with poor quality headphones. Alice richly repays full quality playback.

Alice was re-released in 2000 by Soleilmoon (remastered, box set) and again by the same label in 2010. The packaging for the 2010 re-release, decorated with pasted-up collages (made from scribbled words, splattered blots, appropriated photographs and anatomical illustrations), isn’t as compelling as the earlier, more austere design for the 2000 boxed set (paper slipcases), which had only slightly altered Tenniel drawings against a simple dark background. But no matter. Having Greif’s Alice available again on CDs again is great.

Because this is a story, we want to know what happens next, or because it’s a familiar story, we already know what is coming next. If we set our own speed, we probably wouldn’t pause for long to contemplate the effects of finding oneself suddenly opening out like a telescope. But now Greif controls the pace. We hear a line taken from the book: “She looked down at her feet,” which are becoming alarmingly distant as Alice rapidly grows. The sound of that sentence becomes more and more distorted, then fainter, then a bit frightening, as it repeats and changes several times. A wordless interlude underscores the weird disorientation Alice feels at that moment. After hearing this version, you probably won’t read that sentence again and just rush on to the next one. Instead, you’ll hear in your mind Greif’s invitation to contemplate what looking down at your feet at that moment, and for several moments, even minutes, might sound like. Without picking up the book again, perhaps at a moment of disorientation, you’ll hear Greif’s Alice as the soundscape to your own proportion-altering moment. That’s one mark of a successful work—it starts to inflect your own experience. 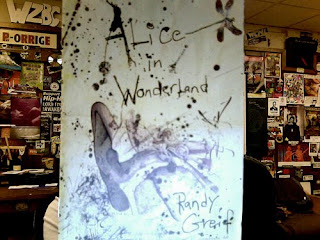 Greif’s Alice isn’t just an acoustical backdrop for a narrative that more or less unfolds as it did in the book. It’s a soundscape as fully realized as the world in Tenniel’s drawings. The range of sound is often sculpted by pause and by repetition. There are musical patterns and percussive rifts. There are vortexes of repeated loops of spoken and played sounds, fits of feedback-like distortion, layers of sound that trade foreground for background and back again, low tones, sharp dissonant chords suddenly struck, followed by waves of dissonance. A spoken sentence like “Oh, the Dutchess!” or the iconic “Off with her head!” repeats, loops, fades, and becomes a background for what comes next. Manipulated words become musical. Syllables loop and loop until suddenly they sound like notes being sounded by instruments. Greif demonstrates how profoundly rhythmic spoken words are or can become if you listen carefully. He shows how trying to distinguish “music” from “spoken word” is actually a false dichotomy.

Repetition is mysterious; sameness in difference compels. How can something be the same and still incrementally change through time so that as it returns we recognize it as both distinct and the same as what went before? Greif’s captivating soundscape exploits this phenomenon so inventively you’re unlikely to feel bored because he’s repeating himself. Instead, his version repeats Alice and becomes itself an instance of repetition: profoundly strange and familiar. You’ll listen to it again and again.

Posted by Bob Burnett at 8:16 AM No comments: