Bob Burnett: Kim has made another leap into the world of dub and dub-influenced sound sculpture with this C60Crew music mix.This time mixing dub's influence in current music (Pinch, Darqwan, Deadbeat) with the textural sound works from the '80s (Mad Professor, Scientist, Bill Laswell) all running through a sieve of producer Adrain Sherwood's master touch.

Bob Burnett: If you have the chance to experience this group live then do it. I was able to do so a few evening's ago at the Barns of Wolftrap in Vienna, Virginia--a locale that was seemingly made with this group in mind. Bill Frisell is currently on a very expansive tour--he'll be playing in several different variations of groups from now until late May. I've had the pleasure of seeing him four times in the past in a variety of ways--John Zorn's Naked City (2 variations--one time at the Smithsonian was by far one of the best live performances I've ever witnessed) his quartet with Hank Roberts, Joey Baron and Kermit Driscoll and now in a trio with Eyvind Kang on viola and Rudy Royston on drums.

The beauty of the current line up rests in the ability for the group to expand on basic charts, improvise in ways that cross over into a variety of nuanced musical styles and effortlessly segue into new areas within the same composition--one minute it's strains of Aaron Copland's modernist sound visualizations, the next will interweave Bill Evans' intricate melodic runs, suddenly it's fragile, eccentric old time similar in scope to QQQ or Tin Hat Trio.

In addition to Frisell's regular Nonesuch releases he has a live download series on his website that I highly encourage you explore. I am hoping this trio makes an appearence with a release.

While Frisell is the namesake I have to give credit to the others in the trio. I know Eyvind Kang's work from his releases on Tzadik. A noted composer in his own right, his albums blaze a trail for me into a magical world of eccentricity all his own--avant-garde yet medieval-tinged court music

is the only way to inadequately/briefly describe what I hear when listening to his work. In this line-up he converts the viola into a sound contact instrument. He explores a wide array of sonic textures--strings, surface, touch, unique bowing come together in a way that had me thinking of John Cage contact mic'ing surfaces such as mushrooms and using turntable cartridges as instruments. Granted, a lot of sonic variety is happening but it's in his control--not due to a digital effect computer plug-in . Rudy Royston is a perfect fit on drums.

He reminds me of the great players--Paul Motian, Ed Blackwell and Jack DeJohnette come to mind; inventive, subtle and dedicated as is Kang to using the surface of the instrument to expand the sonic possibilities.

At the conclusion of the evening the crowd responded in a very positive manner that seemed to really surprise the players--most notably Frisell. He spoke of the great appreciation he had for the response and mentioned this was only the second night out for this line-up and they'd played some of what was heard for the first or possibly second time. Further--he linked the experience to a graduation speech that the late children's TV mainstay Mr. Fred Rogers made at Dartmouth in 2002. Frisell stumbled through remembering exactly why he thought of that but said as a way to close his thoughts he'd dig up the speech and mention it in a clearer way the next time he returned. I looked up the speech and believe what he was getting at was this quote:

Deep down, we know that what matters in this life is more than winning for ourselves. What really matters is helping others win too. Even if it means slowing down and changing our course now and then.

So there you have it---a virtuoso player at the top of his game telling the audience that we were the ones who inspired him. A very nice way to end the evening.
Posted by Bob Burnett at 7:10 AM No comments: 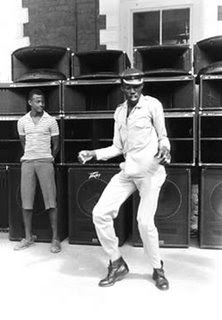 Kim Kirkpatrick: I have been interested in dub ever since purchasing the Mikey Dread LP recently reviewed below. A couple of excellent Creation Rebel albums soon followed, as well as Lee Scratch Perry productions. But I really became a fanatic in 1980 when Adrian Sherwood started his On-U Sound label. His amazing, jaw dropping production and the core group of heavy dub musicians he recorded became a significant part of my musical listening. The On-U Sound catalog proved to be some of the most treasured dub music I would ever own. I used several such recordings on the current dub mix, for example, Bim Sherman, New Age Steppers, Mark Stewart and Mafia, and African Head Charge.

Dub music's origins go back to the late sixties, with sound systems and DJ's performing at outdoor dance parties. Producers in the studios created instrumental versions of vocal reggae tracks, and these dub versions (the B sides) were used to lengthen the playing time of a song. A DJ could move back and forth from the vocal to dub versions, extending the mix and thus the dance floor mood indefinitely. Dub was quickly adopted as a backdrop for toasters, DJs who talked or rapped over the instrumental melodies and rhythms. Dub was also an opportunity for the producers to show off their own skills and musicianship (using very crude equipment), breaking down the source material, exploring and altering the music with their own, distinctive styles.

The echo effects, cavernous reverb, sound effects, sampling, heavy bass, and the mixing board itself defined the sounds of studios and their creative producers. The popularity and progress of dub was swift, and the musical form moved beyond merely dropping vocals out or just extending a song for the purpose of DJs and rappers.The best of these producers stretched dub into new territory, new sonic effects and beats, and longer, more expansive tracks with more complexity.The prime period of dub was from it's origins in the late sixties (Lee Scratch Perry, Herman Chin Loy for example) up until the mid to late eighties (Scientist, Mad Professor, Bill Laswell, Alpha & Omega are examples). At some point in the eighties synthesizers took over, the beats got more regimented, the bass more mechanical, and the natural feeling in the music was gone. A generalization for sure, excellent dub was produced through the eighties, but its peak and pure form was over by that decade. Conversely, by the eighties dub was having a big effect on other music around it, and to this day its influence and atmosphere can be heard in a variety of musical forms.

What is it about dub that attracts me, has led to my having a large selection of CDs spanning four decades? Dub is thick with atmosphere, texture, and a wide tonal range from deep bass to high rim shots. Secondly, it has origins in song structures but moved away from the progression of a song with clear beginnings, choruses or endings. Dub music is about using a stripped down song or selected tracks and expanding off of that platform, and the further out the producer takes it the more I enjoy it. Third, I am attracted to the authenticity of dub, the all consuming and lifelong commitment of it's musicians and producers. Finally, I have always been a big fan of bass, be it Jack Cassady, Danny Thompson, Jah Wobble, Sara Lee, or Charlie Haden, to name a few.

I still prefer dubs formative roots, and fortunately there is no need to get nostalgic or despair if you are so inclined. An abundance of labels exist for you to explore the early, prime period of dub. Some of my favorites are: Blood and Fire, Pressure Sounds, Tamoki Wambesi, Jet Star, Jamaican Recordings, Wackies, and Basic Replay (which reissued Keith Hudson's Flesh Of My Skin Blood of My Blood which was reviewed in January). Another good move would be to find a friend or two who can guide you through dub, or at least share in the good and bad purchases inevitable in pursuit of dub music. I am exceedingly fortunate to have a long time friend who has shared his infinite knowledge of reggae and dub, and given me many an essential and rare recording . I met BC through a particularly competitive eBay purchase. As I recall he felt bad about how much I was paying him for the CD and offered a short list of reggae he could send along as CDRs for my added enjoyment. Well, the first list I politely said "Thank you but no thank you, I already have all of them". I gave the same reply for a second list from BC. After that our conversations and sharing of music took off and we became very good friends. I have never met BC but we have continued to share music for many years as well as our fear and fascination with clowns. The biggest of props for BC, for sharing his knowledge of reggae and rap, and for being a generous friend. I am still working on his rock education, as much as he can bear. The last I heard Jimi Hendrix's first three albums had grabbed his attention and BC was nowhere near to moving on.

Bob Burnett: In addition to the NO KILL FI DUNZA write up, Kim has put together a mix of choice dub. All ya gotta do is click the black kitty and away you go!

Borders Of Dub by C60crew on Mixcloud

Bob Burnett: the newest edition of C60 music mix is a joint venture of solo, improvised, electronic and "classic" contemporary jazz with special focus on a cut from the Anthony Braxton Quartet's fabled (and rare collectable) Willisau album. Additionally, the namesake of the sequence comes from my old friend Ron Esposito's recent release "Open Heart" where he masterfully plays Tibetan crystal singing bowls--that's right--those aren't overlapping synthesizer loops but the natural resonance of the bowls.

Coral by C60crew on Mixcloud

Posted by Bob Burnett at 7:12 AM No comments: