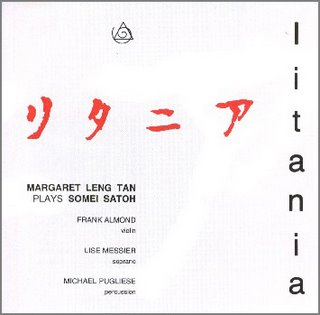 • Buy in Japan
Bob Burnett: I was drawn to this album for a few reasons. The primary reason was that it is an album that features pianist Margaret Leng Tan, a player whose interpretations of John Cage represent some of my favorite interpretations of one of my favorite composer's work—for piano as well as the simple yet delightful toy piano. She has become known as "the leading exponent of Cage today" according to The New Republic. In addition to being known for her playing of Cage, she was the first woman to graduate from the Julliard School of Music with a Doctorate of Music degree from the University. Along on this recording are Lise Messier, soprano; Frank Almond, violin; and Michael Pugliese, percussion.

I was not familiar with composer Somei Satoh or "Litania" before hearing this recording. "Litania" is the first in a series of compositions Satoh did for piano, all of which explore the reverberative qualities of the instrument through tremolo technique. The drones create subtle time lags through a digital delay process. This creates a rich harmonic texture, which is further intensified by the overlaying of a second or third piano. Upon listening to "Litania" as well as the other compositions on this album I felt immediately drawn to LaMonte Young’s sadly out-of-print masterwork "The Well-Tuned Piano"; which is a perfect bringing-together of small, elegant moments of peaceful minimalism in conjunction with large, full, clouds of dense building clusters. Similarly, it seems Satoh’s thinking is in the same place as Young (and John Cage for that matter) when asked about his process for creating "Litania":

I think silence and the prolongation of sound is the same thing in terms of space. The only difference is that there is either the presence or absence of sound. More important is whether the space is "living" or not.

Also—while sitting here listening to the conclusion of "Litania" with the CD loaded into iTunes (on shuffle play) the song that popped up afterwards was "European Son" by The Velvet Underground and Nico. The transition was uncanny. 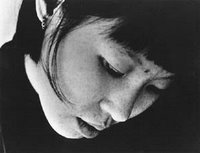 This is not an easy listening classical music experience. However, it’s also not a random sounds-style contemporary free-for-all. There is a lot to be experienced within its complexity and energy as well as the ebb and flow that are vital to the overall composition. Plus, I can’t speak highly enough about being able to listen to anything Margaret Leng Tan touches.
Posted by Mike Johnston at 10:37 AM