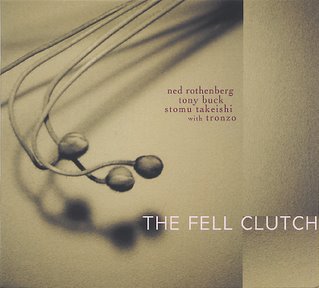 • Buy in Japan
Bob Burnett: I gotta take a minute and back up the clocks of musical discovery time.

This review started for me the day Kim played an Anthony Braxton and Richard Teitlebaum duet from the Arista Freedom label (…another where-are-those-records-now label). I’d say that happened in, oh, about 1978.

That was it. My never-to-look-back infatuation for reed instruments below tenor—contrabass clarinet, bass clarinet, baritone sax—was realized. You know, the popping, deep and raw-raspy horns playing music where you feel the breathing, the player’s jaw manipulations and sense the warm wood of the reed in sync with the textures within the body of the instrument. Braxton, Bluiett, Murray…amen. (With an honorable mention to John Zorn because, while on alto, The Classic Guide to Strategy

has the charmed, poppin’ large sound of the big, deep horns. ) So here I’ve been on this avantskronk byway for the better part of three decades….yet somehow, some way, Ned Rothenberg flew under my radar screen. 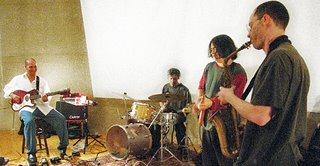 That is, until now. On The Fell Clutch he joins Tony Black (who drums for The Necks), Stomu Takeishi, and Dave Tronzo in creating funky, clear and happening sounds. I sat in the rain at a bus stop listening to this gem. Just absorbed by its feel. Made the start of the evening a rip-riggin’ panic. Rothenberg’s bass clarinet, clarinet, and alto sax give clear, consistent energy to this recording. The interplay is in-the-pocket tight and at the same time offers great, open, almost jam-like freeplay.

This release is on Animul Records, Rothenberg’s own label. Tzadik has recently released a compilation of his solo work

. I look forward to digging into that, too!

Mike: I noticed when I went to Cryptogramophone's site to root around the other day that they have a 2006 release out called Penumbra, by Bennie Maupin

. One of us needs to give a listen to that (and it might be me).

Bob: That's right—and I've heard good things about that release. And in addition to Braxton, Bluiett, and Murray on the big, rich horns I failed to mention Marty Ehrlich and Eric Dolphy. I'm going to stop there because I'm sure I'll continue to slight great baritone players. Like Bernie Maupin. And Gerry Mulligan...Harry Carney...Pepper Adams....

Mike: Stop! But not before I put in a good word for Serge Chaloff. Blue Serge

is an old sentimental fave. But that's getting pretty far afield from Ned Rothenberg. Although Rothenberg did do a funky little piece called "Slapstick" that sort of had some comedic overtones (pace Kim's Dim Dim review) and sort of reminds me of when the old bebop boys would cut loose with a little funky stuff. (If Lee Morgan's "Sidewinder" could be a pop hit, shouldn't "Slapstick" have been, too? In a more ideal world? Sorry, I'm getting far afield again....)
Posted by Mike Johnston at 4:01 PM