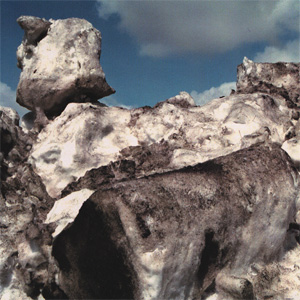 • Buy in Japan
Kim Kirkpatrick: You would think that owning thousands of CDs, and having a few hundred still sealed (some for more then a year) I would always have something I’d want to hear. At the risk of being perceived as a spoiled musical pig, I have to tell you that the amount of music I own frequently does not solve this listening dilemma. Often (snort, snort) I just don’t like anything I try. E*Vax’s Parking Lot Music is one of the rare CDs I turn to when I have nothing I want to listen to.

Lately, in spite of being released in 2001, Parking Lot Music has been on heavy rotation in my life. I might pull it out at home, or on the iPod driving home late from teaching. It is one of those CDs that transforms the windshield into a movie screen, not a monitor, a great big movie screen. And this music makes a wonderful synergistic connection with the fast-moving beltway scenery. Unless you are driving late at night here in Babylon—I mean, Washington, D.C.—this is nothing for you to worry about.

I own a lot of electronic music, and more specifically, of the blips 'n' beats variety. I know a lot of people who will complain or leave the room if any of it is on. My wife says it sounds exactly like her brain functions, which apparently means: turn it off or else? I understand this reaction; much of it is fast, and densely layered. Generally it is mixed with a lot of bright, if not brittle high end, low bass, and not much in the mid tones—an aggressive presentation. Some of my favorites fall into the category of glitch music, building the tracks from digital or vinyl flaws, and this can be non-musical and very irritating at the wrong time. Much of it is German, very dry, and it demands your attention. Certainly there are connections to be made from various European musicians to the music of E*Vax, an American employed in NYC as a web designer. But it is the differences that draw me back to Parking Lot Music with regularity.

Parking Lot Music is all about the melodies—beautiful, fresh, catchy melodies that will rise up in your head long after hearing them. Now it has plenty of beats, so don’t come to this recording if you are allergic to beats. Admittedly, this genre can be only about the beats, and some of it is boring to my ears, having no internal life to it, displaying an interesting show of skills but no substance. E*Vax has created a lot of percussion sounds—beats—but they are intertwined with the melodies. The beats and melodies are supportive of one another, natural, in the manner of Brian Eno’s Another Green World

. This is the highest of praise coming from me; Another Green World changed music for me, and is another recording I've returned to for more then thirty years now.

E*Vax has formed his music using both a synthesizer and real sounds. In an interview for Audio Dregs, he described how the music is formed:

Most of the beat sounds come from recording things around the house or around the neighborhood. I like to use sounds that actually bring to mind a physical object. Electronic drum sounds are often too clean and perfect; I like sounds that are less predictable and have some character. The melodies mostly come from my synthesizer. The synthesizer is a good tool because you can get so many different sounds out of one machine, but I prefer to use acoustic instruments whenever it's practical. When I lived in Portland I shared my house with two other musicians so there were always loads of instruments around—guitar, accordion, trumpet, harmonica, voice. Now that I'm in Brooklyn I'm limited to what I have on hand, my synthesizer and a trumpet, and I can hardly play the trumpet at all.

This use of real sounds and the emphasis on melodies makes all the difference when it comes to holding my interest. E*Vax has created a beautiful, intelligent recording, one that reveals new aspects every time I play it. It is also playful and capable of getting me into a good mood, not an easy thing to accomplish.
Posted by Mike Johnston at 5:56 PM