Mike Johnston: There are some jazz albums that every non-jazz-lover feels he must own, Kind of Blue foremost among them. Likewise, there are some classical pieces so great that everybody should own them, regardless of whether they normally like classical music or not. In the '40s and '50s every self-respecting music lover owned a copy of Beethoven's 5th (typically Toscannini's); later, when Mozart had superceded Beethoven as the classical master of popular choice, every record collection had to have A Little Night Music (Eine kleine Nachtmusik) and of course Vivaldi's Four Seasons. But foremost among such pieces for me is Bach's marvelous D-minor 1052.

Robert Plant once used the phrase "hammer of the gods" when talking about what he intended to deliver on a then-upcoming new Led Zeppelin album, and the phrase stuck to describe the band's sound. But back in a time when the idea of God had real tooth, Johann Sebastian Bach was a man who believed the purpose of his entire existence was to exalt the greater glory of God. Possibly the greatest musical genius in history, he was the real deal, the hammer of God—the phrase describes the stormy and glorious drama of his best music to a T.

And it describes nothing so well as the 1052. Nominally a harpsichord concerto—a piece for harpsichord accompanied by orchestra—it was often played on piano in the "modern" era, prior to the "original instruments" revival of the 1970s and 1980s. It has three parts, or movements, in the typical Baroque pattern of fast-slow-fast. In this music, you want the harpsichord—the orchestra and the distant miking take the ridiculous bite off the sound that sometimes ruins close-miked harpsichord recordings, and there's just no way that the piano can convey the high, thin, unmodulated, almost hillbilly high-mountain sound the drama of the piece demands. 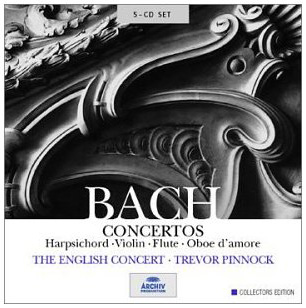 • Buy in Japan
There are plenty of indifferent versions of this piece out there, so you have to pick carefully. Still the best 1052 overall, in my opinion, is Trevor Pinnock's. Pinnock was an enfant terrible of the original instruments craze, a keyboardist who devoted himself to harpsichord when it had been relegated to historical and academic recordings. As the bandleader of a young group called The English Concert (he directed these performances from the keyboard), he wore his hair long in those days and sometimes talked, in interviews, about bringing the beat and exuberance of rock 'n' roll to Baroque music. His fierce Goldberg Variations competed with Glenn Gould's evergreen piano version in the 1980s (Pinnock seems to me more influenced by Gould than I ever heard him admit), and The English Concert's Brandenburg Concertos were a bestseller (along with their Four Seasons, which sold like a pop hit and made Pinnock a classical superstar). His 1052 was every bit as good as these, if not better—an absolute high point of his early career. Its fierce, driving beat is balanced by nuance and a great feel for the logic of the piece, combining for a peerlessly dramatic reading. Hammer of the gods indeed. It's now available on a 5-CD set of all the concertos on Deutsche Grammophon's Archiv label. While there's nothing wrong with any of this music or any of these performances, five CDs of accompanied instrumental music by Bach may be a little bit much of a commitment for the non-classical listener. 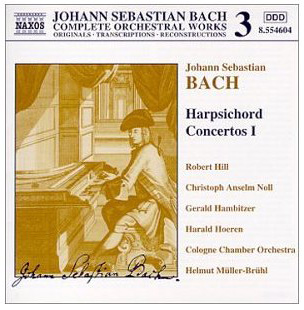 • Buy in Japan
An even better bet for casual listeners is a newer (Y2K) record by an outfit that is fast becoming one of my favorite classical bands, the Cologne Chamber Orchestra under Helmut Müller-Bruhl. Here you get four complete Bach harpsichord concertos (No. 1 in D minor, BWV 1052; No. 2. in E major, BWV 1053; No. 4 in A major, BWV 1055; and No. 5 in F minor, BWV 1056) for a mere nine bucks—that's $2.25 per concerto, and it's hard to do better than that, value-wise. But the best part is that the music-making is so good. This is one of the few 1052's that can compete with Pinnock's. Müller-Bruhl seems to have a knack for finding just the right tempo and phrasing to make music sound natural and right, never plodding or leaden, never rushed or glossed-over, and his 1052 nearly equals Pinnock's for drama—not an easy thing to pull off. And it is even better recorded: the orchestral parts have a detailed fullness and an immediacy that you hear in only the best classical recordings. It sets off the ethereal wash of the harpsichord superbly. This is really an enjoyable record sonically as well as musically.

And no record collection should be without a great Bach 1052.
Posted by Mike Johnston at 7:38 AM