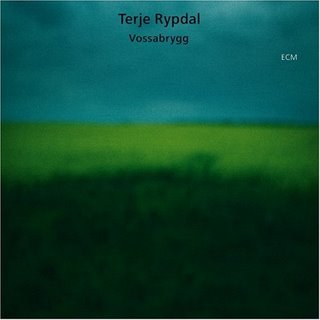 • Buy in Japan
Bob Burnett: I’ve been on a Terje Rypdal sabbatical for several decades. Not that he did anything particularly wrong—I used to love his fuzzy, thunderous, distant guitar sounds and played his records all the time. Terje Rypdal was one of those guys who would light up the radio station phone lines with callers asking "what are you playing?" when I'd play him on my late night show. ("Terje Rypdal—right—Rypdal, yeah, he's Norwegian….R-Y-P-D-A-L" went the conversation….) 1979’s Descendre, being floating nighttime sound at its best, made me spell his name for curious listeners too as did other albums from that era such as Waves (1973), Odyssey (1975), and After the Rain (1976). I also found a lot to like about 1978’s inspired trio work with Jack DeJohnette and Miroslav Vitous as well as his incredible playing on Michael Mantler’s Edward Gorey-inspired tales, The Hapless Child.

Somehow, I just stopped buying his albums, moved on to other things; probably felt like I needed to expand beyond the ECM Records artists and that lustery sheen of producer Manfred Eicher's sound.

That’s all changed with Vossabrygg. I’m back. And I’m really enjoying the reunion.

Vossabrygg is Norwegian Rypdal’s tribute to circa 1970-era Miles Davis, specifically Bitches Brew as well as the 1969 pre-Brew classic In A Silent Way. From the first notes of Rypdal’s lead-off "Ghostdancing"—which quotes directly from the theme of the Bitches Brew composition "Pharoah’s Dance," it becomes quickly obvious that this is a serious, thoughtful, and reverant effort.

Despite all this referencing to Miles Davis, this is by all means a Rypdal record. His fuzzy, far-reaching "Nordic Cool Jazz" sound has defined Rypdal’s playing since he first gained notice in the late '60s playing fractured, burning Sonny Sharrock-style guitar in Lydian Chromatic Concept inventor (and noted Miles Davis influence during his modal composition breakthrough Kind of Blue) George Russell’s ensemble along with eventual ECM Records mate saxophonist Jan Garbarek.

Thank goodness Terje Rypdal didn't pay attention to what was said about this era of Miles Davis' work in the documentary "Ken Burns Jazz," in which Gerald Early put down Bitches Brew by likening it to "playing tennis without a net." I think Miles Davis would have loved this album and not just because it harkens back to some of his own strongest work, but because it shows the ever-expanding artistry still within Rypdal; a player who has been around for forty-plus years and is still reinventing himself, still hearing new possibilities, still exploring—something Miles Davis did too throughout a long career in "directions" in music.

So for me it’s a welcome return to Terje Rypdal’s music. In Vossabrygg he’s created a fine listening experience.
Posted by Mike Johnston at 8:20 PM