Yo La Tengo: I Am Not Afraid of You and I Will Beat Your Ass 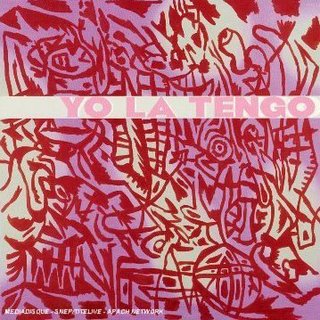 Bob Burnett: This is probably the best album of cover songs I've heard in a while.

Only one slight problem with that...there aren't any cover songs on it. Yo La Tengo wrote everything.

This is the result of three music-making record collectors crafting an homage album. I can almost picture band members Georgia Hubley, Ira Kaplan, and James McFew standing at podia holding buzzers, Jeopardy style. The Alex Trebek guy (who happens to look like an indie record store clerk) says, "The Necks listening to Sister Ray"—buzzers and lights go off and one of them shouts "what is the first song on our album?" "Right!" shouts Indie Alex, "...now go put it together as a fuzz-drenched but groovin' guitar-jam improvisation"—and off they go to make an amazing cut like album opener "Pass the Hatchet, I Think I'm Goodkind."

The last couple of extraordinary Yo La Tengo albums (2003's And Then Nothing Turned Itself Inside-Out and Summer Sun) have felt consistently thematic in a way that songs create an overall album atmosphere and effortlessly segue into each other. (I might add that Summer Sun took some critical grief for tying beachy relaxation together with spacey avant jazz, with thanks to legendary musicians such as William Parker being part of the mix. I had to sigh as reviewers went down that hand-wringing, head-shaking "well, they are in decline" road. No way, said I. I loved it, played it to death and still think it's great.)

And I think this one is great in an entirely different way. This album's head-spinning shifts make each song jump out like popping the pre-set station buttons on an old car radio. For instance, check out the jump from a slow, achingly touching song like "Feel Like Going Home" into "Hey Mr. Tough"—a falsetto-ey, piano-cowbell-and-horn-section pop groover that has the amalgamated sound of goofy Vince Guaraldi piano, high-pitched school-of-Van-Morrison vocals and Parliament's Horny Horns together on a Tuesday night roasting marshmallows out back at an AM radio transformer...cleaned up in a good Yo La Tengo way. And from there we go to Byrds-inspired riffs gently wrapped in a lovely floating feedback shell with yet another unmatchable YLT genius-inspired bridge riff within "The Race Is On Again." Don't touch that dial! You'll miss a Can meets the Ft. Apache Band/farfisa organ moment!!! Your turn...listen and find the hidden treasures yourself—both reverent and original. There's a million of 'em within these sonic walls.

I greatly respect YLT's longevity, wit and creative energy. It's not every day that an established band would break into vastly different directions the way they do—and cleverly succeed with every effort.