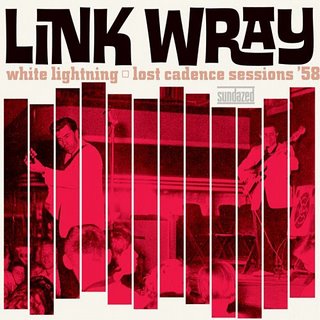 Kim Kirkpatrick: Link Wray and his Ray Men changed rock music in 1958 with the release of the instrumental "Rumble." Up to that point, electric guitars were played with a clean sound, even if it was wild music—like Scotty Moore on Elvis Presley’s most famous rockers or Buddy Holly for example. Link Wray invented distortion, the use of power chords, and generally innovated guitar noises never heard prior to "Rumble." The song was a big hit when they played it live and, as stated in the liner notes, at "dance-hops the kids would ask Link to play that 'weird' instrumental...." The popularity of the song led to a recording date to make “Rumble” a single. As the story goes Link Wray was not happy with the studio sound—too tame, too clean—so he poked holes in the tweeter speakers of his amp!

Amazingly, the sonic result of this action in the studio was considered dangerous; a menace to society. Keep in mind, "Rumble" is an instrumental. The song was banned from many radio stations because (they claimed) it glorified juvenile delinquency. The single, released on Cadence Records, still became a big hit in the United States and Great Britain, and influenced many a future musician, among them Pete Townshend, Jimi Hendrix, and Neil Young.

Link Wray’s White Lightning—Lost Cadence Sessions '58 is that recording, finally surfacing nearly five decades later. First, let me inform you that "Rumble"* is not on this release. But many equally raucous, equally creative tracks are here. "Raw-Hide," the follow-up single, might sound familiar, and you get two versions on this recording.

One realization this eighteen-track recording reveals is that Link Wray was way more than a one- or two-hit musician. This material sounds live in the studio, and it tears up the place. It brings to life the description "burning guitar." As you go through these two-minute songs you hear how creative this man was with the guitar. Just his playing ability would have been enough to warrant attention, even without the innovative sound.

He was known for searching out cheap guitars (with unique sound qualities), for connecting together (and destroying) multiple amps, for making modifications to equipment, and for experimental recording techniques. Towards the end of his life Wray told a reporter, "I wanted to play something that didn't sound like Chet Atkins," and he certainly steered clear of that clean sound! Link Wray created many a new, raw sound, and of the four Link Wray CDs I have, this one captures that best.

Grateful thanks to Sundazed for releasing this performance, and to Bob Irwin for his transparent mastering from the tapes.

*"Rumble" was used in Pulp Fiction by Quentin Tarantino.