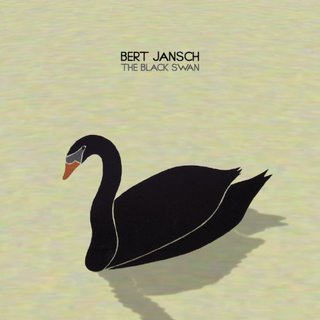 Kim Kirkpatrick: A longtime staple of my musical collection, Bert Jansch, has a new release, The Black Swan, on Drag City. Praise and props to Drag City (a label with a huge, varied “alternative” roster) for releasing this new Jansch recording last fall. Jansch is a giant of the guitar, reaching back to the early 'sixties, and of English Folk and folk rock music. He inspired Neil Young and Jimmy Page some forty years ago, and continues to receive accolades from younger musicians such as Johnny Marr, previously the creative guitarist in The Smiths (The Beatles of the 'eighties). With this recording Jansch has the assistance of several contemporary musicians, with a varied lineup from track to track. This includes Beth Orton and Devandra Banhart joining him on vocals, 'cello by Helena Espvall (of Espers), and David Roback (of Mazzy Star) on one track playing slide guitar. In addition there are three fine (and very welcomed by this listener) solo cuts of vocals and guitar.

Bert Jansch has a distinctive, rich British voice, though perhaps an acquired taste for some. His guitar playing has always been breathtaking, stunning, beautiful—and it certainly can be traced back to English folk, his solo and group (The Pentangle) work. Jansch’s powerful, percussive, finger-picking style has always revealed strong blues and jazz styling as well. He has a rich discography of solo work going back forty years, and also many essential releases with The Pentangle. This sophisticated folk/blues/jazz tinged group included Bert Jansch, Danny Thompson on acoustic bass, John Renbourn on guitar, Terry Cox on percussion, and Jacqui McShee’s strong, pure vocals.

The Black Swan has the tone and feeling of Jansch’s solo work and that of The Pentangle. This release includes a couple of songs previously performed by The Pentangle, “A Woman Like You” and “ Watch The Stars.”* Kevin Barker plays lead guitar on "Watch The Stars." Barker is yet another diverse contemporary musician (with a couple releases on the Teen Beat label), who most recently appeared on I am The Resurrection: A Tribute to John Fahey on Vanguard. Also on this track, Beth Orton joins Jansch on vocals and guitar—a risky endeavor for her, comparisons to Jaqui McShee being inevitable.

This predictable vocal comparison is a bit disturbing to me, having heard and read a few comments to the effect that Orton’s singing is inferior to McShee's. Now, I've been guilty of criticizing cover versions in general, insisting that the original is the only one to revere. With Jansch involved, though, this really isn’t a cover version—and besides, I have the highest respect for and interest in any musical attempts he offers us. He has not let me down on The Black Swan, and I have to give it up for Beth Orton’s participation in general, and on this particular song. “Watch The Stars” as performed on The Black Swan is different, much more of a relaxed folk song, not as big or ethereal as The Pentangle version, but also not inferior. I like Beth Orton’s singing. She has a nice traditional country blues quality to her voice. In general her vocals contrast nicely with Jansch’s deeper, but soft, voice.

As you may have noticed on the C60 site, our writing often directs you to related and essential music, not just the currently reviewed one. Bert Jansch is no exception. His solo work, duet work with John Renbourn, and Pentangle releases are all worthy of exploration. Perhaps my own past experience will explain how excellent these recordings are. Back when I owned vinyl I made it a point to own two copies of all the above musical releases—one to play on the air and one to preserve and protect.


*Both "Watch The Stars" and "A Woman Like You" first appeared on The Pentangle’s Sweet Child double LP live recording. I'm not normally one to direct people to a live album as a starting point, but this wonderful performance is the exception. Currently you can get a re-mastered 2CD version with several extra tracks, plus the two songs above which only appear on this live album as performed by The Pentangle.
Posted by Mike Johnston at 7:46 AM