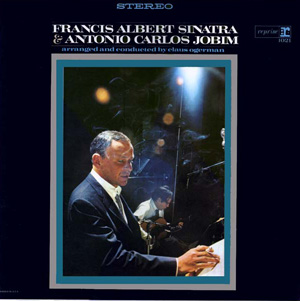 I think I’m asked about Sinatra because he had such a long career with so many releases that curious people just want to get some sort of grasp on his oceanic catalog. One suggestion I always mention is the 1954 In the Wee Small Hours

because I’m attracted to it as a conceptually consistent, ballad-based album. It was Sinatra's first LP with arrangements scored by his long-time collaborator Nelson Riddle.

But Francis Albert Sinatra and Antonio Carlos Jobim is my favorite.

In 1967 Sinatra teamed with Brazilian singer/musician/composer Antonio Carlos ("Tom") Jobim and composer/arranger Claus Ogerman to record a handful of Jobim’s songs as well as three standards by Irving Berlin, Cole Porter and Alexander Borodin. The result is a masterwork of gorgeously refined orchestrations of richly composed Jobim (et al) melodies in tandem with perfectly delivered lead vocals by Sinatra and the supporting Jobim.

I thought for a long time the environment of my initial hearing of this album was what made me like it so much. The first time I heard it I was in a friend’s chic 10th floor apartment at the corner of Greenwich and Christopher streets in the West Village of New York City. As the album effortlessly wafted throughout his open, spacious loft, I watched the midtown Manhattan skyline change slowly in the light of early evening, thanks to the view I had out of the story-high half-moon windows. But I’ve come to realize it wasn’t just a breath-taking, inspired environment that swayed me; Pete Hamill, author of Why Sinatra Matters

(out of print), also considers it one of Sinatra’s best.

Tom Jobim's gift for song was first realized outside of Brazil in 1959 thanks to his and Luis Bonfa's score for the film Orfeu Negro (Black Orpheus). Songs from Black Orpheus such as "A Felicidade" and "Desafinado" ramped up popularity for the suave, swaying grooves of the bossa nova music movement of the early '60s that inspired American jazz players such as Stan Getz, Charlie Byrd, and Miles Davis.

, a 1962 guitar-sax led duet album by Getz and Byrd, became a hugely popular seller as did the 1964 landmark follow-up Getz did with guitarist-singer Joao Gilberto, Getz/Gilberto

, which also featured Jobim on piano and vocalist Astrud Gilberto. I always imagine Jazz Samba and Getz/Gilberto spinning on huge living room console stereos at countless suburban cocktails parties back then, the cigarettes and old-fashioneds flowing along with the warm glow of the music.

So the bossa nova happy hour pump was primed by 1967 for the Sinatra/Jobim collaboration. The result was so successful to me because I like the way Sinatra’s singing strengths fit so perfectly with Jobim’s compositions. He maintained a quiet elegance in his delivery, never really pushed or sang "big." And not enough can be said about Sinatra’s unrivaled gift for phrasing; unrushed and unfettered, just behind the beat, time after time, song after song.

The only shortcoming of this album is that it is really short—somewhere around 35 minutes as I recall. But I’d rather have a little over a half-hour of this soothing, gentle, smart music compared to practically anything else that's twice the length. Plus, the price is right—under US$10. While you are at it I’d suggest getting the Stan Getz albums mentioned earlier. Both have aged well too.

to buy this recording if you're in the U.K.
Posted by Mike Johnston at 4:27 PM