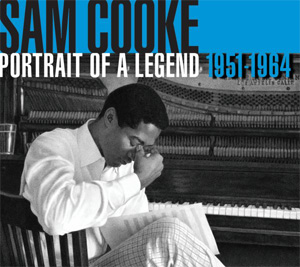 Mike Johnston: Sam Cooke's sweet blue bel canto defined soul music for an entire generation prior to the British Invasion. Various writers like to claim that he invented soul music, which is a defensible thesis except for the fact that "soul" was just the then-current euphemism for black pop song. Put it this way: if there had been an "American Idol" in the 1950s, absent 1950s racism, Sam Cooke would have won going away. He was a new kind of black star—young and clear-eyed, intelligent, a savvy businessman, politically aware. He had dozens of songs in the Top 40 throughout the years covered by this anthology, including his signature hit "You Send Me," which went to #1 in 1957, the year I was born. The song is one of those perfect pop turns, like Patsy Cline's "I Fall to Pieces," The Temptations' "Just My Imagination (Running Away With Me)," or Brian Wilson's "In My Room," in which the raw carbon of silly superficial pop music somehow emerges a diamond. 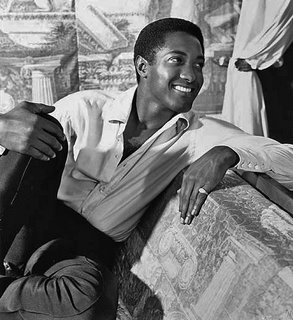 I was seven years old when Cooke was murdered under murky circumstances at the Hacienda Motel in L.A.—an event which I would no way have been aware of at the time—so Cooke was never anything but historical for me. He is one of a group of vocalists I engaged with in short, intense bursts over my formative years through single greatest hits albums, like Louis Armstrong (it was years before I realized he played trumpet too), Woody Guthrie, Patsy Cline, and Nat King Cole (and even Jimi Hendrix, who also died before I was really aware of him and whose Smash Hits I wore flat before I got any of his other records). Perhaps not surprisingly, I think that many pop vocalists whose medium was the 7-inch single can be fully appreciated—and, not coincidentally, adequately represented in a generalist music collection—by one well-chosen greatest hits record. That's not even remotely true of Hendrix, of course, as I learned soon enough, but I still think it's perfectly true of Sam Cooke.

...If, that is, an ideal hits collection exists, which it doesn't for many such artists. But now it does for Cooke. This one Abkco CD collects all the Sam Cooke anybody but a specialist ever needs, from a cut or two of early Soul Stirrers gospel to the posthumous "Shake" from 1965. It includes all the hits from the silly '50s doo-wop and love songs like "Another Saturday Night" to the oddly chipper "Chain Gang," to a rare true blues ("Little Red Rooster"), all the way up to his plaintive self-penned masterpiece "A Change is Gonna Come," which has been called the black "Blowin' in the Wind" and which gives evidence to the songwriting potential we lost when Cooke was shot dead at the age of only 33. (Although, arguably, Cooke's own performance is not the best version of this now canonical modern hymn.) There are a whopping 30 songs on this CD in all (plus one brief speech cut), and the skillfully remastered sound quality is as good as it gets.

You can pick Sam Cooke apart every which way, from his gospel roots to his chain-gang grunt rhythms (as on "Sad Mood") to his call-and-respond choir backings, all the way to the immense reach of his influence, cited by musicians from John Lennon and Bob Marley to Bruce Springsteen. (Cooke is one of those artists about whom it can be honestly said, you've heard him even if you've never heard him.) To be honest, I don't listen to Sam Cooke every year, and I'm not sure I'd want to hear the thirty songs at once, all in a row. But the bottom line comes down to two things. No matter what Sam Cooke sings, the overarching emotion he communicates is joy. And then the Voice. As Simon Cowell tartly informs many an Idol wannabee, "This is a singing contest." Say what you might about pop crooning as art or not, Sam Cooke sure could sing.