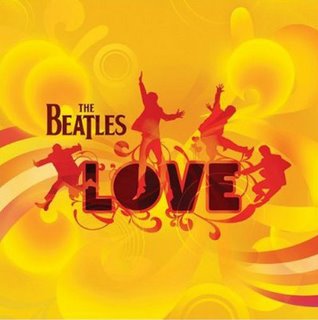 Bob Burnett: I'm not what you'd call a "Vegas Guy." I don't gamble and am not interested in "being entertained" by shows. Granted, I've had a great time wandering around there; the Caeser's Palace/Bellagio shopping mall by itself could probably single-handedly cause world peace. There is no way any fundamentalist religion, regime or government could stand up in the face of such visually opulent, fun-filled spending opportunities. I mean, where else would you find stand-alone Elton John and Celine Dion shops?

So when I found out last spring that The Beatles' "Love" was happening at the Mirage by Cirque de Soleil I was a bit...let's say...underwhelmed. Let me clarify: I don't have a sacred, untouchable, historically frozen Beatles obsession. Of course, when I started buying music as a middle school kid, like many I bought Sgt. Pepper and Abbey Road on my first visit to a record store. I bought more Beatles albums, listened a lot, played "Revolution 9" backwards with candles burning and all the other 13-year-old-kid Beatles album things you did in those days. Still, I was underwhelmed by the thought of "Love" because I felt there had to be something incredibly overblown and cynical about a Vegas-type show tapping into the singular genius known as The Beatles.

Then I got the chance to see a rehearsal of "Love" last June.

My articulate, wordsmithy review would be "Whew...that was unreal...amazing." My wife spent the next few months telling people, "As you know Bob hates everything and he thought 'Love' was great." It was great. It's not the gaudy, silly-love-song-tainted McCartney plays the Super Bowl halftime show la-de-dah fest I figured it would be. It's more Marcel Duchamp than showtune; it's complex, engaging, visually and physically stunning, and thought-provoking. It's even a tastefully moving homage to John Lennon and George Harrison. The stage is in the round and is presented in pristine 7.1 surround sound. I could blather on and on but I'd highly suggest you find a way to see it. The reason I bring it up is because the stage show soundtrack is way more advanced than the Love CD. I wish I had a recording of the actual 90-minute show because in many ways that experience makes the Love CD sound a bit safe. The stage show has wonderfully layered collages of Liverpool-drawl studio banter, false starts and sound sculptures intermingling within much more aggressive segues and song transitions.

At this point it's pretty common knowledge that Love is a re-working of Beatles songs by George Martin and his son Giles. They used the creatively freeing technology of Pro Tools to digitally separate out tracks, re-configure, re-think and re-position this bit of a song with that bit of another song and present songs you've heard three million times in a new way. I find the listening experience to be refreshing and fun; it doesn't make me suddenly like any of the kitschy songs I've never liked ("Octopus's Garden" and "Yellow Submarine" for instance) but it certainly expands the scope of possibility into a new view of The Beatles' songs and I appreciate that it's not a greatest hits medley. The beyond Love big picture for me is how much I enjoy how Pro Tools-type digital re-mixing technology has opened up the whole "mash-up" concept of taking parts of some songs, rhythm tracks of others, and other sonic sources, and sculpting them into a new piece in the same manner Joseph Cornell collaged visual objects. Love is sort of a mash-up. It's not completely rotorelief postmodernist dizzying like DJ Food's pure genius Raiding the 20th Century work but it is worth having. If anything you gain an appreciation for the high-quality of the original Beatles recordings and timelessness of their playing and songwriting. Who knows—maybe the outcome of Love will be the The Beatles CD catalog will be remastered and re-released properly—just like what happened with The Velvet Underground albums.