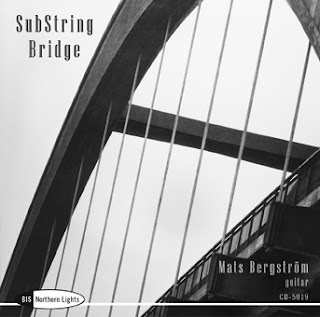 Bob Burnett: This was a leap-of-faith purchase for me. Mats Bergström is a Swedish classical guitarist who is a professor of guitar music at the Royal University College of Music in Stockholm; I was lured to his record because I noticed the album included the Steve Reich composition "Electric Counterpoint," a three part (fast, slow, fast) overlapping of 12 pre-recorded solo guitar and bass guitar segments in accompaniment with one live guitar.

. Its overlapping parts create pure Reich energy, all pulsey, melodic and beautiful. I’ve always loved the composition as well as Metheny’s performance. I’m a longtime admirer of Reich’s work in general—going back to 1976 when I first heard "Music for 18 Musicians" on Georgetown University's radio station WGTB. On this album, Bergström offers his own warmly performed version of the piece, and I really enjoy his efforts.

This album mixes together many different directions for the classical guitar—some spooky and spare, some sprightly and melodic, others with Debussy-style chord clusters. The particularly engaging title piece, composed by Ake Parmerud, is a slow, echoey, harmonically rich intermingling of acoustic guitar with electronic effects—known in the composition’s title as "computer interactions." The composer also explored the guitar as a sound object, investigating all the sounding possibilities of the guitar from the perspective of it being realized in its standard form as well being considered as an electro-acoustic object. Bergstrom uses closely mic'd string harmonics, short and clustered runs, string pops and guitar body percussion to make for an engaged listen. Included on this album are other interesting solo guitar compositions by contemporary composers including Arne Lothman, Toru Takemitsu, Anders Hillborg and Johan Soderqvist. Also on the CD is a fairly simple but nicely done video of Bergström playing "SubString Bridge" on the bridge that inspired the composition's name.

The album winds down with the remix project "Escortic Joynt" by classical remixers Trio Escort. "Escortic Joynt" is a natural mate with another Reich-inspired album—the highly recommended (at least by me) Reich Remixed

, a collection of various artists' mash-up interpretations of Reich's work. (In fact, Bergstrom recommends the album too, in the liner notes.) Reich makes for perfect mash-up material in the hands of the crafty and creative Trio Escort. His work has always been connected to a continuous pulse, warm interweaving of instrumentation and slow pattern shifts. "Escortic Joynt" taps into Trio Escort's gift for using found objects to create percussive rhythm tracks and mixes them with spacey sound collages that flow in tandem with the guitar lines of "Electric Counterpoint" and other Reich compositions such as "Different Trains." The blended re-working makes for a wonderfully flowing ten minute soundtrack perfect for stark winter driving—be it in Sweden or elsewhere.

It's always nice when a blind faith guess while flipping through the racks at a record store pays off—I hope you see this one too and say "oh yeah, that!" and scoop it up.


Mike Johnston: Just a word about sound quality...BIS is well known in the classical world for taking a lot of care with the recording process, providing honest, unexaggerated sound. If it has a "house tendency," it's to go just a little astringent and reverberant; some of its early records, at least, could sound a tad resiny. And of course the acoustic guitar is one of the most satisfying instruments to record—it doesn't seem difficult to make acoustic guitar sound immediate, visceral, and lifelike, the typical flaw being to mike it too close and make it sound too big, hyper-real.

Although BIS is a classical label (this is on its Northern Lights subsidiary) and Bergström is nominally a classical guitarist, SubString Bridge should really be considered a crossover album—crossing over, that is, from contemporary avant-guard classical to electronica—and it's interesting to see what BIS has done sound-wise in this (partially) unfamiliar territory. Its efforts are a smashing success, I think. The recording strikes me as rich and full (if, yes, a touch reverberant) without being exaggerated or too upfront. The sound doesn't call attention to itself outrageously, but its tasty excellence adds to my enjoyment of the music. It helps you into the music as opposed to directing your attention away from it. All in all a beautiful sounding CD, I thought.
Posted by Mike Johnston at 7:45 PM