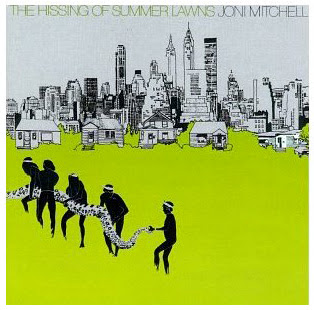 Bob Burnett: Since Mike wrote about Throwing Muses' The Real Ramona as a look back to a nostalgic longtime favorite, I might as well share one of mine—Joni Mitchell's The Hissing of Summer Lawns.

I’ve always endured some chatter about this being an example of a slickly-produced L.A. "smooth jazz" studio musician’s album; music performed by hotshot players to be listened to by either other hotshot players or wannabe hotshot players. After all, some of the pioneering legends of instrumental pop play on this album—Larry Carlton, Joe Sample, John Gueren and Robben Ford, to name just a few of the long list of primarily session players. The L.A. Express horns and the Jazz Crusaders are all over this one too. Even Jeff "Skunk" Baxter of Doobie Brothers and early Steely Dan fame makes an appearance.

There’s only one problem with the argument that I should be repulsed on the basic "anti-smooth jazz" principle: I love this album. Always have. Always will.

The Hissing of Summer Lawns came out in 1975, at a time in Joni Mitchell’s career when she was yearning to move beyond the singer-songwriter folky brand she'd been forced to wear. She was transitioning to the complicated world of jazz-tinged writing and to vivid, prosaic stories of life and emotional struggle. The overarching themes of this album focus on loss of control, being controlled, and regret. Think Raymond Carver short stories and place this album’s lyrical theme in the same frame of reference. It weaves in the midst of tales and thoughts that reflect fleeting moments of life passing by—specifically, in one instance ("Harry’s House"), as a submissive housewife lost in suburban ennui.

This album was not viewed as radio-friendly when it was released—which is surprising given its relatively high-gloss sound. The closest thing to a hit was "In France They Kiss on Main St." which topped out at #66 on the Billboard charts. Not a ranking that would be deemed (to quote Joni from "'Free Man in Paris") "the star-maker machinery behind the popular song" (which incidentally holds the distinct honor of being the winner of the C60 Award for "best song that includes the word 'unfettered' in the lyrics" category*). The album did momentarily zip up to #4 on Billboard, but faded quickly. Seems it was just considered too indefinable for the album-rock world of that era. Regardless of not being considered "commercial," it was voted in the top 100 by Germany's Spex magazine's list of 100 greatest albums of the 20th century.

I join the thoughtful Germans in finding the beauty this album offers. Plus, it launched Mitchell into an interesting run of albums circa 1975–1979—Hejira, Don Juan’s Reckless Daughter, and Mingus.

I feel lucky to have had this album as a teenager; the stories struck me deeply and showed me how important it is not to let life take you someplace out of your control, turning you into something you can’t bear to think about.


* Did we vote on this? I'd want at least an honorable mention for Bette Midler's "The Unfettered Boob," although I suppose it's not really a song. —Mike
Posted by Mike Johnston at 4:51 PM