Dean and Britta: Back Numbers 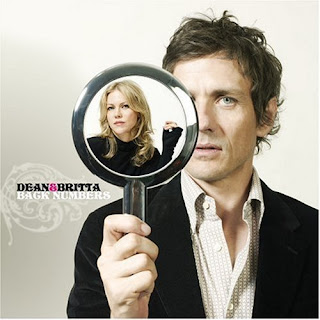 Bob Burnett: Luna. They were a special band.

If you scroll down the list of things we tend to write about on C60, take pinches and appreciative nods from said list, mix them together with a brisk shake-up, the cream that would rise to the top would be Luna.

Luna admirably called it quits at their apex a few years ago, after more than a decade of tapping out their special craft of intertwining guitars, understated and perfectly fashioned lyrics, etc. etc. laundry list of rock music superlatives. Dean Wareham was the focal point of Luna: the guy at the mic with a guitar and the primary writer of songs. Bass player Britta Philips joined in 1999 after years of indie rock bands, movie parts and cartoon voice-over work. I recall seeing them with C60 pal Kim when Britta first joined—at the original Black Cat in D.C. She looked new-person nervous but was a terrific addition to the band with her thoughtful and melodic basslines.

So now they’ve evolved from Econoline van-traveling band mates in Luna to the recently married couple/musical cohorts Dean & Britta. They made an album a few years back called l'Avventura

that I played so much my kids began calling it the “la-la-la-la album” thanks to a particularly grabbing lyrical segment. Back Numbers is their second full-length album and features a mix of semi-kitschy albeit always respectful cover songs, a few originals and an overall sway-swoon of a vibe that is sleepy, soothing and occasionally kind of goofy in a Dean and Britta kind of suave/clever goofiness way. "Words You Used to Say" (from last year's EP of the same name) has the most initial punch—and indirect Luna-ness. And while we’re playing what song sorta sounds like an old band "Crystal Blue R.I.P." has echoey touches of Wareham’s pre-Luna gig, Galaxie 500. There is also a cover of Lee Hazelwood's "You Turn My Head Around" that has Britta belting Ann-Margret style. Seems like a song you'd hear wafting through the brightly painted suburban neighborhood in "Edward Scissorhands" for some reason.

But besides the one "Brittabelter" moment, the album stays within a casual approach that is a rather enjoyable listen; one of those albums that you put on, sit down, complement yourself on your well-placed speakers and let its tracks slowly unravel. Yeah, I’ll admit Dean and Britta and producer Tony Visconti make the whole approach kind of light and fluffy, with soft strings, jangles, vibrato, lushy fills and an occasional snicker of casio keyboard, but I felt I should write about it because it is starting to become a familiar face on my cd player.