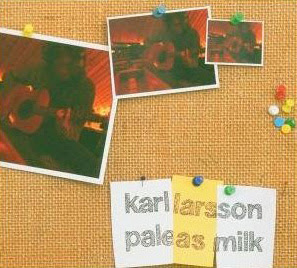 Kim Kirkpatrick: The Swedish band Last Days of April has been together for over a decade, and have released six full length CDs*. Songwriter and multi-instrumentalist Karl Larsson leads LDoA, and through the years has moved the band from emocore to pure pop music. On Pale As Milk, which was was released in 2005, Karl Larsson played all the instruments, wrote all the songs, and handled the production and recording duties. However, Pale as Milk does not sound like a multi-track indulgence, nor does it sound sterile or mechanized.

Though Pale as Milk is a solo endeavor, it sounds like a band performing—it is warm and interwoven, and natural, song after song. It is so well crafted that it is best listened to in its entirety. Seriously. And I am not saying that lightly—Larsson’s level of thought and quality is rare.

Bonus points for Mr. Larsson for not fading any of his songs out, a common gambit I find annoying and, well, lame. I suspect Karl Larsson doesn’t fade out his songs because he knows the power of transition and how to use deliberate endings and beginnings. The segueing of these nine songs is worthy of your attention—the care, subtlety, and interrelation is a pleasure to hear.

In researching Karl Larsson, and specifically this solo release, I read that it was all about "spontaneity" for him, and that it "doesn’t share the same struggle for perfection" as his work in LDoA. I am quite familiar with LDoA (thanks, Nick) and even more so with Pale as Milk, and I don’t understand the comment. The level of detail—the layering of the instrumentation—perhaps a hundred sonic touches—even the knob-turning on the production has a creative fluctuation and excitement. Most of the songs are built on three excellent, warm-toned guitar tracks, but lots of other sounds come in to play as well. Bass and drums (of course), various electric keyboards, perfectly placed and controlled feedback. As an example of the detail and subtlety, on "Lion’s Escape" a toy xylophone is mixed in (briefly) with gargantuan rhythm guitar. (I found it interesting he wrote and sang a song from a Lion's perspective.)

Now, I've heard moans about Mr. Larsson’s voice; personally I like his singing. I read a review that claimed all the songs sound the same, like he repeated one song. Of course I don’t agree with that opinion, and I wonder why anyone who thought that would bother to write a review. Sample a few songs, check out his voice, his sound. This is not a cheap CD, but I encourage you to check it out. Pale as Milk is intricate, perfect pop music, a release you can spend many hours getting familiar with.

to buy Pale as Milk

to buy the Japanese version, with two extra tracks

*Last Days of April are on tour now supporting a new release, one I hope to hear very soon. They are planning on touring for the first time in North America in late spring.

Posted by Mike Johnston at 1:25 PM