The Jesus and Mary Chain: Munki 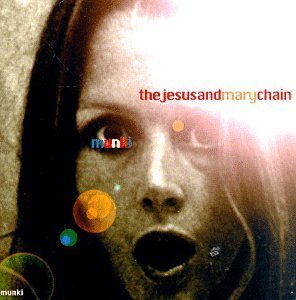 Kim Kirkpatrick: I am here to praise a neglected release by The Jesus And Mary Chain—Munki, a CD anyone fond of noise, feedback, cutting lyrics, and general mayhem in music should own. After a general description of The Jesus And Mary Chain (JMC) and pointing out several fine re-releases, I will give you more details on Munki and a couple other suggested purchases.

, and Stoned and Dethroned

. All of these reissues are DualDiscs*, with improved sound, extra tracks, and video material. I frequently think of purchasing all of them at once—clarity of sound is always on my mind with music I deem worthy of keeping. But I do have decent CDs of the ones I really like; I haven’t bought into DVD sound, and I am never going to sit down and watch the videos. But the main obstacle is my strong urge for more diversity in my collection. Other music and limited funds keep blocking my JMC re-purchase.

The Jesus and Mary Chain came from Scotland, formed in 1984 by Jim and William Reid. These two brothers had a stormy drug and alcohol-driven relationship during the fifteen years of the JMC. It was the live shows that first brought fame and attention to JMC. These shows were tense with anticipated violence, either from the Reid brothers or their fans. The brother’s antagonistic behavior towards their audience—not acknowledging them, playing with their backs to the crowd—created the tense environment. This “fuck you” attitude from the brothers led to the infamous violent rioting of their early days.

The duo of Jim and William Reid's music, and behavior, made it clear they were classic rock 'n' roll bad boys. The JMC created a powerful, uninhibited blending of The Velvet Underground and The Beach Boys. Add the blasting force of The Ramones and an equivalent to Phil Spector’s Wall Of Sound production, and you’ve got a unique combination of noise and pop sensibilities. The assault of the guitars, the physical waves of noise, combined with attitude-to-the-max vocals—all of this created a blissful, warped experience in the late eighties. They were an important catalyst for many a noisy pop band as well as the entire Shoegazing genre. The Jesus And Mary Chain sound can be heard in My Bloody Valentine, Swervedriver, Lush, Ride, The Stone Roses, etc. Overwhelming guitars, all fuzzed out and distorted, with a droning, mesmerizing noise, and always with an underlying melody.

Religion, drugs, modern culture, and sin—the JMC repeatedly dealt with these subjects, sometimes combining them in one song. Their big, swirling sound, with feedback on the edge of exploding, the hypnotizing drone, the slinky melodies, all of these elements pointed to a religious or drug experience. Add the sexual, nasal tone of the vocals, the rapier wit of the lyrics, and you’ve got a decadent, addictive, sonic experience.

The lyrics above are from The Jesus And Mary Chain CD Munki. This was the last recording from The JMC, released in 1998 on Sub Pop. By this point the two brothers were hardly speaking—in fact each of them worked with the band separately for this final recording. This dichotomy between them is plainly expressed in the opening song from Jim Reid:

...And the closing song from William Reid:

The tension between the brothers, and the toll of dealing with the music business, drove them to a final, creative peak in my opinion. The deluxe re-issue treatment has not been applied to Munki, perhaps because of contractual or label issues, or because it was never considered one of their better releases. For you this is a good thing—the CD is cheaper then the DualDisc reissues. And Munki is the fastest, nastiest, sonically most packed, most rock-n-roll-brilliant music The Jesus And Mary Chain ever released. My advice is to buy Munki now, and snag the reissues Honey’s Dead (minimal, classic JMC), and Stoned And Dethroned (primarily acoustic, shuffling and relaxed in a slow- to mid-paced Velvet Underground way). You need this noise!

*Unlike regular CDs, DualDiscs are double-sided. One side contains standard CD audio. The other features DVD content, often including the album in higher-fidelity stereo or a 5.1-channel surround sound mix; lyrics, photos, and computer files; music videos, interviews, and documentaries; and anything else you might find on a regular DVD. Though DualDiscs are slightly thicker than ordinary discs, the DVD side should play in all DVD players, and the CD side should play in all CD players.


Mike Johnston: Just one little audiophool comment to add re JMC: to hear, crank it. This isn't music for in-the-office volume levels on tiny little computer speakers sitting there looking up at you innocently from either side of your monitor, or earbuds on the city bus, or fastidious little stereo systems with expensive two-way mini-monitors and glowing toobs. What JMC wants is a big nasty amp with lots 'n' lots of wattage and cheap tower speakers with vinyl on 'em whose sides flex when they play really loud. If you're not worried about your woofers, it ain't loud enough yet. Be thinking the home version of club volumes. Kim is willing to listen this way but I'm not sure how many others of us do. Without some volume, I'm not sure if JMC makes much sense.
Posted by Mike Johnston at 10:10 PM