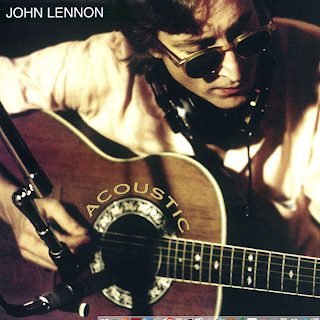 "Okay, so flower-power didn't work, so what? We start again." —John Lennon, on Acoustic
Mike Johnston: Apple (the computer company) obviously just reached an agreement with Yoko Ono, because John Lennon's entire solo catalog has just gone up on iTunes.

This seems like an event, but I'm not sure. I bought a handful of these albums when they were new and listened to some of them heavily (although some of them, such as Menlove Avenue, I had never heard once), but it was hero-worship more than anything else. I liked the anger, too, I think. Plastic Ono Band in particular is not nearly as good in retrospect as I thought it was at the time; Bob says it "worked when he made it because it was just the cathartic album he needed to make at the time," and he's right, but it seems like a period piece now. I'm not saying it doesn't hold up at all, but it's not as powerful now as it was then.

It's interesting how little of John Lennon's solo output I've forgotten, considering that most of it is forgettable. All of it is very spotty—as songwriting, as singing, stylistically, and in terms of production.

I recommend the new Acoustic compilation, however, which I bought. It's generally terrific. Some of it redefines the "lo" in "lo-fi," aspiring to but not reaching the standard of cheap demo-tapes, but the roughness and simplicity helps; it reminds us that we're listening to a ghost. Nice time capsule and some interesting takes on semi-familiar tunes. Most of it was probably recorded on the cassette deck Lennon allegedly carried around to "jot down ideas" on, although a few might have involved an actual microphone, and there are a couple of live things probably from bootlegs. Nothing fancy anywhere.

The song choice on Acoustic is good. It's painful to listen to John's Yoko-isms on "Cold Turkey," but then, that was all part of the gestalt of the whole post-Beatles scene back then. Of course it contains a version of "Imagine," which is Lennon's "Yesterday." (Though not as good.) "Imagine" is one of those horrible afflictions that you like when it is new, quickly get tired of, then arrive at the point where you definitely never want to hear it again...and then have to listen to it 400 more times, because it's everywhere and you can't fucking escape. On Acoustic it's the inevitable encore that the audience won't be talked out of—so just "imagine" all the happy pseudo-fans swaying along to the quasi-Utopian, faux-commie treacle and smile. Or program it out. 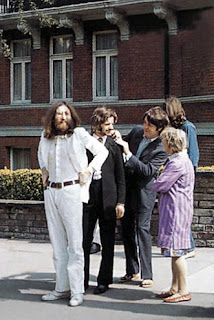 The only solid criticism of Acoustic I can think of is that Lennon wasn't a very good acoustic guitarist. Not as good as someone like, say, Willie Nelson, who is similarly known as a songwriter and singer and not as a guitarist. Most of Lennon's guitar work here falls into the category of "strumming along."

John Lennon's solo career is very similar in my book to Michael Jordan's career after the Bulls' sixth championship. Unnecessary, for the most part, and yet you follow it because, well, he was John Lennon. While not really a success, it's noteworthy in that it wasn't worse. And while it would have been good for the legend if he'd abruptly left music altogether at the pinnacle of his game, on the other hand you really don't begrudge him his subsequent labors—posturings, missteps, and failures and all. He earned it.

I just don't like to imagine Lennon in Las Vegas, like old Elvis, in a white suit. (There are worse things than death.) It could have happened, too—Lennon always had that goofy, spoofy undercurrent to him. And maybe he would have steadied his wavering musical compass if he'd lived. Frankly, it wasn't looking that way. What I like to "imagine" is something else Bob suggested—that he would have reinvented himself, and found something entirely new to do, outside of music altogether. It's a thought.
Posted by Mike Johnston at 2:34 PM