Bob Burnett: I figured I'd digress from the normal routine of writing about albums I have and recount some stories about albums I wished I had and looked for--sometimes for years--sometimes with success and sometimes with longing heartbreak. In the internet/CD/re-release era we live in the thought of having to search out albums in a quixotic manner from store to store is now a slightly archaic, albeit glimmery warm and Proustian reflective consideration. Oh well, I'll share some of mine. Feel free to jump in with yours, too. 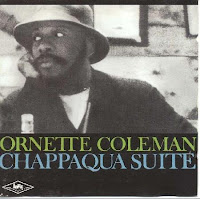 Chappaqua Suite: Ornette Coleman I first heard about this album while working in Haffa's, a record store in Athens, Ohio, in the early '80s while in college at Ohio University. The store's owner, and fellow Ornette Coleman afficionado Ron Esposito, was purported to have a coveted pressing of this rare gem--however I never saw or heard his copy played--I only heard his hushed, respectful reference to it. The reason it was so coveted was because it was a long out-of-print, Europe-only release of a rejected soundtrack for the film by Conrad Rooks. I looked for this one for about 15 years. I finally got it as a reissue on CD--which is once again out-of-print and on Amazon for $65 used.

Fly: Yoko Ono This was another fascinating mystery album for me in the early '80s because it was purported to be a difficult listen and because Yoko Ono annoyed everyone. Plus, it was a two album set which I found commendable in a Metal Machine Music difficult listen kind of way. I looked for this one for a number of years and finally found it, for something like $30 and played it a few times.....and now have no memory of it whatsoever. Ah....well....it's easily available now for about $20 re-issued on CD. Seems that makes it too easy to even return to.

Lumpy Gravy: Frank Zappa I heard a French pressing of this gem in the '70s while in high school and was smitten. I loved the layers of sound, abstract "fly on the wall" dialogue, clanging percussion, noise, chaos, rapid changes. This was when Zappa was known mostly for Apostrophe by a certain minority of shaggy, semi-geeky-but-hip Marlboro and weed smoking high school boys--and in the case of my high school by one additional girl known as "Susie Creamcheese". I finally found this one and dropped $25 of hard earned $2.35 minimum wage salary at the Long John Silver's on this one. I later sold the vinyl version for a profit and replaced it with a CD version.

LaMonte Young: The Well Tuned Piano My biggest heartbreak. I had the vinyl box set. Some time ago I was liquidating a substantial part of my vinyl collection and I sold it thinking it would be easy to get on CD. I was wrong. I've never been able to find it. I even wrote Gramavision and begged them to sell me one--after all it was discontinued from their catalog and surely there must be a few in some warehouse. Nope. Oh--in case you were curious, it's available on Amazon for only $850 used. The only thing I ever was able to recover was about 52:00 of it off of Napster. Thank you benevolent law-breaking soul who illegally posted that for me.
Posted by Bob Burnett at 10:56 PM