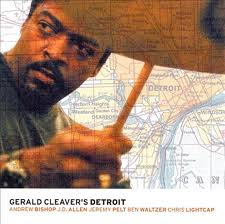 Bob Burnett:  This morning is a case where, for once, MOG's "Just For You" selection process worked.  It told me since I listened to Tim Berne's Snakeoil I'd like Gerald Cleaver's Detroit.  I didn't know anything about this album before this listen.  I think Tom Greenland's review from All About Jazz makes a great point when he says:

Since I'm listening on MOG, I'm not getting the benefit of the album
packaging. Apparently there's a photo essay in the liner notes showing dilapidated buildings
and former neighborhoods now shells and ghosts of a time gone by which (as said in Greenland's review) "strikes a melancholy tone, but the music is
anything but."
I'm finding the music reflective.  The ballad "Henry" feels like a Detroit version of John Coltrane's New York City reflection "Central Park West".  There's plenty of post hard-bop driving, pulsing and interesting music here too.
All and all a nice discovery.  Here's hoping MOG's "Just For You" scores a few more for me.