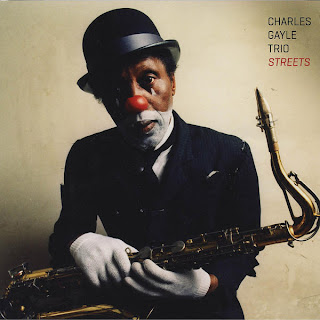 Bob Burnett: There's an excellent article by Dan Spicer in this month's The Wire magazine about saxophonist-pianist Charles Gayle. Charles was part of the '60s music movement called "The New Thing" or "free jazz".   For years Gayle took on a variety of odd jobs to help support his life as a musician.  At one point sometime between 15-20 years ago (he doesn't recall for sure) something changed in his mind.  He quit trying to scrape by with jobs and, as he puts it, changed.

"I have to change...and that was it.  I gave my duffel bag to a friend because it's all I had, and I just went to the streets. I had no idea what I was doing. I didn't know what it was going to be like to be homeless and for how long."

"(Homelessness) absolutely changed me. And it's still in me. You don't think the same as you think when you're living like I'm living now, like regular people live. You haven't time to think like that. Something else takes over. Your dreams are different in terms of what you think about the future. You're living from day to day so you can't think, "Oh, next year I'll go to Hawaii". You can forget about that. With no heat all those years...you're a different person.  it's about surviving. It can break you, I'll tell you that. It can break you for life."


After years of the street, Gayle now has a modest apartment near Tompkins Square in New York City.  The term "street" now means something different to him.  He's taken on the persona of "Streets The Clown" and plays gigs as Streets and still goes out on the streets, in costume, and plays.  In addition to The Wire article, The Village Voice recently had a Q&A article with Gayle.  It goes into details about his life as a homeless person and how Streets The Clown came about through the combination of being homeless and continuing a life dedicated to playing music .

He's recently released an album titled Streets.  He's in his full clown costume on the cover but  there's nothing but raw, intense music happening inside.  The Wire also linked to a video of Streets the Clown playing in the streets in New York City.