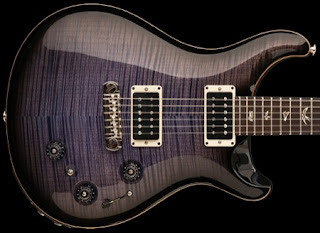 In February of 2012 Paul Reed Smith released an electric guitar that I think may be the most innovative instrument they have ever produced. The model is the P-22, equipped with two 53/10 pick ups as well as a piezo one mounted under the bridge. Piezo pick ups have been around for decades installed in various hollow or semi hollow guitars for amplification of the acoustic sound. However, for the first time PRS has specifically designed one for a solid body guitar. If played through a PA system or an acoustic amplifier using the piezo setting on the  P-22, it would be hard for anyone to tell it is a solid body guitar and not an acoustic one. The P-22 is also a versatile electric guitar with newly designed 53/10 pick ups. The electric and piezo features can be used in tandem or separately which is an amazing option for players.  The guitar can be played through a PA system or acoustic amp and a standard guitar amp at the same time. The P-22 has an outlet dedicated to the piezo as well as an electric/piezo combination outlet.These features have the potential to radically change a guitarist's options in the studio and performing live. Up to now an acoustic track would be laid down in the studio and then an electric track over top. Two tracks combined to create a rocking guitar sound with the clarity of each string being heard. With the P-22 the guitarist can send the 53/10 pick up signal to his guitar amp and a piezo output to the PA system (or acoustic amp) at the same time. The P-22 can also be plugged into just a guitar amp with one cable. Using this route you can use the third knob which makes it possible to blend the amount of piezo and 53/10 pick up tones desired, cleaner (more acoustic) or more electric tones depending on preference. On stage a guitarist can switch mid song from a gorgeous acoustic sound to playing a fully charged electric guitar by simply moving a switch. If you check out the videos in the link below you can hear guitarists and producers talking about (and demonstrating) these features. The P-22 has a lush acoustic tone but it is also a fine electric guitar with newly designed, tonally versatile (single and humbucker) 53/10 pick ups. Like all the current PRS guitars the P-22 has truly functional volume and tone knobs with a full range of tonal options.


Through the years I have owned a few Paul Reed Smith guitars which are made here in Maryland. The company was formed in 1985 and gained initial notoriety from Carlo Santana's endorsement of their guitars. From the beginning PRS guitars were known for their versatility - a musician could use a PRS guitar for a session's gig or on stage and have the tones of various Fender (single coil) or Gibson (humbucker) guitars in one instrument. This was a revolutionary creation in a guitar and one that many professional musician's embraced. My most memorable experience of a PRS guitar's versatility came in 1993 when I saw Los Lobos play in a small club for Clinton's inauguration. David Hidalgo was playing a gold top PRS that from song to song would shift, sounding like a Gibson Les Paul to a Fender Strat or maybe a Tele, just from changing the position of the five way rotary switch on the guitar. Los Lobos use a variety of guitars and amps when recording much of it for a classic, warm vintage tone. Hidalgo was playing a PRS that night because of the tonal options, and convenience of it on stage. I am not trying to imply the early PRS guitars were dead ringers for a vintage Gibson or Fender but they came close enough to be useful back then.

Right up to today the flashiness of many of the PRS guitars, the color options and insane flaming or quilted maple tops, has probably turned off as many guitarists as it has attracted. One could dis PRS because of this flashiness, the steady release of limited editions (the Dragon models for example), or the collector's snatching them up (not unlike Leica hoarders who never use them). Seriously how can you play a $10,000.+ guitar with a 200 piece dragon inlay of abalone, mother of pearl and turquoise? Partially for these reasons, and interest in vintage instruments, many guitarists have dismissed PRS for decades. In addition, for many musicians the pursuit of a magical vintage instrument (high priced and becoming more rare by the day) is the ultimate goal. Finding a fine sounding, mojo laden vintage guitar is hard to do, especially one costing less then a new car. This pursuit is made all the more difficult because quality control in the 50s and 60s was less than consistent and many of the guitars were never particularly good sounding from the start. This historical obsession has many believing the best guitars (and guitar designs) have already come and gone. Several once creative companies such as Fender and Gibson have sat back for decades and reproduced lesser quality versions of their classic guitars from 50 years ago.

Most young guitarist start out emulating a favorite player's style and tone and there is a good chance that involves a Fender or Gibson guitar. Signature models and re-creations (if only cosmetically) of a few historic models are very popular and drive the market. Starting out enamored with say Jimmy Page, Kurt Cobain, or even Joe Pass is part of the appeal of vintage instruments (or copies) for players. They want that specific sound they've heard from famous guitarists and believe it is all about the equipment. When you think of rock guitarists it is generally easy to pinpoint their sound to specific guitars, amps and effect pedals. Jimi Hendrix (Fender Strat and Marshall amp), Neil Young ( 53 Gibson Les Paul and Fender Deluxe), Tom Verlaine (Jazzmaster and Vox) for example*. Obviously many guitarist have an arsenal of instruments, amps, and pedals but my point is most are known for a particular, recognizable tonal quality or sound (Santana and his PRS guitar). The genre of jazz guitar has generally been limited to large hollow body instruments, often using the neck pick up for mellow, soft tones. More contemporary jazz guitarist such as Sonny Sharrock, Bill Frisell, or John Scofield have signature tonal qualities as well, a sound consistent in all their music.

I have owned numerous vintage Gibson and Fender guitars. Fender Jazzmasters, Jaguar, Tele JR., Custom Shop Strat, as well as Gibson 330s, a 335, and a Tennessean. I am not a great or even good guitarist by my own standards but I have a very good ear for music and guitar in particular. Besides my difficulties with playing guitar I have been frustrated by most of the guitars listed above for consistent, technical reasons. Most mass produced guitars have too thin and narrow a neck (described as a "fast neck") causing me to fumble around hitting strings I don't want to. Secondly, the bridge pick ups on the vast majority of guitars were always too bright for me, painfully so, to the point of my not using them


PRS guitars could easily rake in the dough by reproducing guitars they designed and built 25 years ago. But Paul Reed Smith is not interested in making the same guitars over and over, an admirable position and one I want to promote and support. Paul Reed Smith and the PRS company has made a commitment to innovation and serious, steady efforts to improve upon the guitar (electric and acoustic) and quite recently amps. For me PRS innovation became crystal clear in 2008 when they released the first 57/08 equipped guitars. On the surface one could have perceived these 57/08 pick ups as a marketing ploy, an attempt to sucker in those interested in vintage tone. The name 57/08 is a combination of 1957 classic Gibson Humbuckers and 2008 PRS manufacturing date. In reality the 57/08 pick ups were the result of years of research trying to figure out why some vintage guitars had magical tone (specifically mid to late 50's Les Pauls) and others built at the same time were mediocre. The conclusion (simplified) was it had to do with the wire used and the machine that wrapped the pick ups. By modern standards the wire's thickness was far from uniform with a wide variation from the winding pattern of the machine. PRS located the original wire used on 50's Gibson Les Paul guitars and the actual machine used to wind the wire. Thus was born the 57/08 pick up manufactured from this vintage wire and machine.

The fact is anyone I know who has played a PRS 57/08 equipped guitar became a believer. For me it took less then 5 minutes in the music store to hear what I wanted to know. These pick ups sounded like what I had been looking for in numerous other guitars, a thick, rounded tone with absolutely no painful bright or thin tones, not even from the bridge pick up. Rolling off the volume knob offered additional clarity, and backing off on the tone knob softened the sound without killing the guitar's tone! Each year since 2008 PRS has made some changes and options to these pick ups, releasing 59/09 and 53/10 versions, and most recently the narrow field versions of the 57/08. All of these pick up changes are exciting with clearly noticeable changes in tone and astounding sonic variety within any one guitar. The most recent variation in fact are the uncovered, block shaped 53/10 pick ups on the P-22 which have amazing clarity as well as a modern, massive tone.**

We can look forward to the PRS P-22's innovative construction and design adding to the possibilities for musical expression and expanding what we will be hearing live and from recordings. The P-22 guitar has so much unique to offer, abilities never before available. But it also has the qualities of every modern PRS instrument. Overall, across the line (including their reasonably priced SE series) PRS builds well crafted guitars with amazing quality control. The 57/08 pick ups and subsequent pick ups are highly responsive to the player's attack on the strings. All their guitars have truly useful volume/tone knobs and substantial, nicely shaped necks. The current, 21st century line of PRS guitars and the P-22 in particular make the possibilities for expression appear to be infinite for an accomplished musician on stage or in the studio. 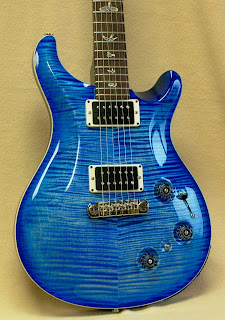 * Interestingly you have someone like Neil Young favoring one 1953 Gibson Les Paul named Old Black (actually a gold top underneath the black paint) and still using a small Fender Deluxe amp over 50 years old. Then you had Jimi Hendrix who played any number of Fender Stratocasters right off the shelf and discarded them without a second thought. And he was playing through a wall of Marshall amps. Both musicians have recognizable tone and personal style, but defined and expressed themselves very differently as regards equipment and it's importance. They also share what Bob has referred to as a "special relationship with electricity". Some times it sounds to me like they are not so much playing guitars as they are the power of electricity.

**
Much credit is due Brian Meader at The Guitar Sanctuary for my knowledge and understanding of Paul Reed Smith guitars.  For decades Brian has guided me to PRS guitars and the tone I was seeking but could barely describe. He has the rare ability to describe and demonstrate tone and features clearly and never steer you in the wrong direction. He has prevented me from buying far more guitars then I purchased from him.