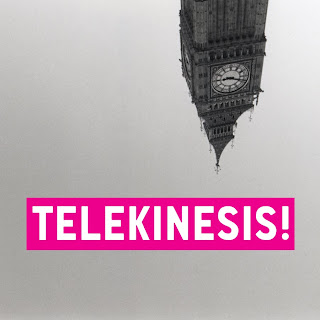 Kim Kirkpatrick: Telekinesis is essentially a one man band, Michael Lerner, who does all the writing, singing, and (for the most part) plays all the instruments on this release. Telekinesis is pop rock music, very catchy melodies that grab you immediately, and within seconds you are on board, eager to take the 30 minute voyage. The songs are fresh and sound immediate, as if they were being created on the spot. After listening to half the tracks a few things became consistently apparent about Lerner's songs. The songs build as they progress, getting thicker with sound and instrumentation. And if a song doesn't introduce itself at a fast pace it will get there soon. As you make your way through the tracks you recognize how every song is deliberately advancing, both the music and the story lines. Lerner's insistent, ever forward style raises the listener's anticipation, you pay closer attention to shifts in the instrumentation and the progress of his little love stories. The songs come, do their thing, and leave, with no annoying repetition as is common with a lot of the genre.
Michael Lerner is a fine drummer (this stands out on the recording), but he also plays a lot of beautiful acoustic guitar (excellently recorded). Often his songs will explode into rhythmic electric guitar (early Wire came to mind), drumming you can't sit still to, and layered vocals. With Lerner doing almost all of this himself, it is particularly impressive to me how spontaneous the results sound. Chris Walla (of Death Cab For Cutie) added some nice instrumentation (bass, piano, organ, lead guitar) here and there. I particularly liked his backward forward piano on "Great Lakes".
Chris Walla is also credited as the producer, engineer, and mixer for Telekinesis. It is a beautiful, natural sounding recording, with a multitude of nice sonic touches, often surfacing as little intros or outros of the songs. "Rust" (the opening song) sounds like it has a projector running in the recording studio. Walla's touch really adds to the enjoyment of this recording, and you feel a connection between Lerner and himself. It comes through in the big hearted sound and performance of the music. I won't be playing this recording to death as I think it would wear it out for me. But I welcome it into my musical collection and look forward to revisiting it on occasion.
Telekinesis was released by Merge Records.

Bob Burnett: I just queued this one up to get when my emusic account refreshes. Merge Records has a pretty strong showing on emusic and I've sampled around a bit in the past: Neutral Milk Hotel, The Clientele, Camera Obscura, Arcade Fire to name a few. It's also home to c60 perennial favorite, the Clean.
Posted by Kim Kirkpatrick at 10:09 PM