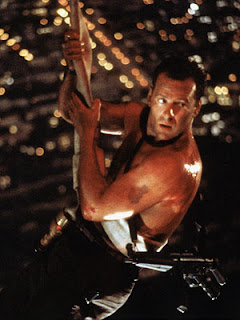 Kim Kirkpatrick: In my recent posts for Built To Spill I mentioned Neil Young, how intense and transcendent he could be live. Thinking about "Cortez The Killer" live brought to mind his performance of "Rockin' In The Free World" on Saturday Night Live back in 1989. It was an incredible moment on TV, a brief assault by Neil Young at his very best. All the more amazing when you learn of how it came about. The events leading up to the performance are described well in Shakey: Neil Young's Biography by Jimmy McDonough. Neil was performing not with Crazy Horse, and not with the musicians he had intended to use for a few days of recording and the SNL appearance. Instead Neil appeared with drummer (Steve Jordan) and bass player (Charley Drayton), both of whom Neil had not selected. Poncho Sampedro was the lone member of Crazy Horse performing that night.
The performance is still stunning 20 years later, so full of energy, anger, relevance, and Neil Young having an absolute blast performing. Notice how the song and Neil are being pushed by the "stand in" drummer and bass player. Also check out the incendiary connection and interaction between all of them, simply amazing. The electric version of "Rockin' In The Free World" on Freedom seems to drag by comparison.

Bob Burnett: thanks for posting this performance, Kim. It's nice to know such a clean file of this exists. I read Neil Young was like a caged animal before going onstage--plundering out like a Viking instead of calmly waiting to be announced witha "how ya'll doin' ta-night?". It's quite impressive how he was able to get "the beast" tones on live TV--where feedback squalls become part of the air; the sonic existence of energy. This is a treasured performance. A time when he was affecting and being affected by music around him. I hear Sonic Youth and My Bloody Valentine within what's happening here.

Posted by Kim Kirkpatrick at 11:10 PM