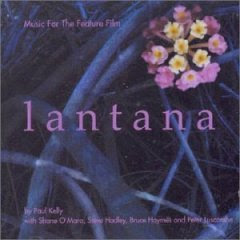 Bob Burnett: I listened to Paul Kelly's soundtrack to the film "Lantana" before I ever saw the movie itself. I know that's a bit unusual but my friend and Sydney-region music source Brad sent the soundtrack my way and based solely on the strength of what I heard I purchased a DVD of the film and really liked it too.

If you haven't seen "Lantana" you should consider renting it.

Director Ray Lawrence created a wonderful interweaving of lives that become more and more complicated and connected. In addition to being terrific drama, the film has a wonderful "look" due to the primary use of natural lighting. "Lantana" Director of Photography Mandy Walker further explains:

"To shoot a film with natural light is harder than lighting because you have less control. Ray Lawrence has a very particular style and way of making a film that is based on natural performances and the environment that you are working in. The actors, he wants to feel, can be in a room for example that is the least bit cluttered with equipment, and each location is chosen for the atmosphere that already exists there. "

To its credit, the soundtrack doesn’t particularly need the film to stand alone as a great listening experience.

Paul Kelly created a musical space that one reviewer aptly called "desert ambient". An interesting description given the film was shot in urban and suburban locations around Sydney. To me the soundtrack has a longing, lonely feel; Kelly plays extended vamps on guitar and is joined on piano (Bruce Haymes) bass (Steve Hadley) and drums (Peter Luscombe) all colleagues of Paul Kelly in the sometime/unofficial band, Professor Ratbaggy. On first listen I was reminded of the energy and direction of The Necks when they get into one of their long, slow groove-based improvisations similar in feel to their Drive By album.

The music makes for a colorful, floating background. There have been many occasions where I put it on in my office, let it play and find myself drifting along with it as I type or do other tasks. Although I praise its “Erik Satie-like” qualities of being able to be simultaneously present and ignored it shouldn’t be taken as saying the music is boring; it doesn’t just lay there like wallpaper soundtracks. Incidentally, composer Paul Kelly is mainly known as a rock musician in Australia. He’s fronted a number of bands over the decades and is known for writing and performing heartfelt songs that capture the spirit of Australia. One review mentioned similarities to Elvis Costello.

I know the retail price for the CD is high so you may want to check-out the film first, get a sense of the music and keep an eye out for the CD when you flip through the racks.
Posted by Bob Burnett at 7:21 PM