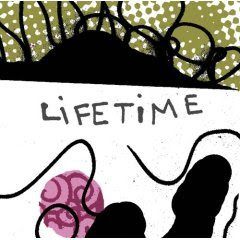 Rob Green: I was more than a little nervous when I found out Lifetime was not only touring again, but were also about to put out a new album after 10 years of silence. My first thought was “Leave it alone! You’ve made an indelible mark in the annals of mid '90s Hardcore! (Hello Bastards (1995), and Jersey’s Best Dancers (1996)) Here and gone like Ninjas! Ninjas don’t ever return to the scene of the devastation they hath wrought after years of falling out of shape and doing something other than assassinating ear drums!”

Well I’m happy and relieved to report that not only does this new effort by Jersey’s favorite sons (I ain't talkin’ about Bon Jovi!) live up to their legendary first two records, but I honestly think it’s their best so far. Instead of a rusty old machine trying to shake life back into itself, this new record feels like a nice bottle of wine that was opened at the right time, allowing sonic ass-kicking melodic hardcore to slide its way down and light the fire of the fifteen year old in all of us. It gives you that old familiar feeling of cutting school and heading to the arcade to blow your entire wad of birthday money.

This record is pure accelerator from the get go. From the first track "Northbound Breakdown" (a clapped out hot rod ride down memory lane in the summertime) to the quick tempo nod to record nerd nostalgia on the final track "Records at Nite", Lifetime has taken a well deserved break from adulthood. Almost like an early midlife crisis, these dudes jumped right back into the soup after ten years being completely off the map, and made a record

that all of us in our mid thirties who were slowly losing touch with what was right in the world, really desperately needed.

It’s a reassuring feeling to know that bands can be older and still move forward without bending to today’s trends. This is real hardcore melodic punk. There are no black on black suits with red ties. There are no Edgar Allen Poe haircuts. There are no neo-emo pretty boys wearing FUCKING EYELINER. Just alienated kids who happened to have grown up a bit, but still know how to make pure, flying-by-the-seat-of-your-pants, both-middle-fingers-in-the-air hardcore. Thanks Lifetime, not a moment too soon.

Rob Green grew up in the San Francisco Bay area and got involved in the late 80’s Gilman St. punk scene (Operation Ivy, Crimpshrine, The Mr.T Experience, Tilt, and yes of course Green Day). He's played guitar and drums in a million bands, some more successful than others. He toured the US and Europe playing guitar for the Parasites in the early '90s. Most mornings, he hangs out with Bob and talks music at Stacy's Coffee Parlour.