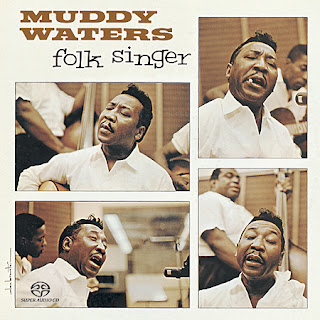 Bob Burnett: Muddy Water’s acoustic blues album Folk Singer was recorded at Chess studios in the fall of 1963. It may be 40+ years old but has an evocative sound that remains fresh today. It is considered an audiophile classic. The original session for Folk Singer was a trio—Muddy played acoustic slide guitar, Willie Dixon was on stand-up bass, and the young, fairly unknown at the time Buddy Guy played the second guitar.

The album title was a marketing ploy devised by Chess label founders Leonard and Phil Chess to tap into the expanding top forty-charting folk music “scene” of 1963. Artists such as Peter, Paul and Mary, The Kingston Trio and the Rooftop Singers were all charting successfully. While having little resemblance with the "Michael Row Your Boat Ashore” style folk music that was trendy, Folk Singer allowed Muddy Waters a unique opportunity to divert from the funky electric blues/ R&B sounds he was most known for and record an album of spare shouts and moans played on a battered Sears folk box slide guitar. It was the style he'd made famous decades before in his Mississippi playing days. His voice resonates deeply: telling blues tales in a turbulent and pleading way.

Folk Singer allowed Muddy, Willie Dixon and Buddy Guy to reach deep, strip the music back to its roots to a time when this music was more likely played on a front porch instead of in a world class recording studio. The CD version of this album contains the original nine songs that the trio did (a few cuts adding drummer Clifton James) as well as five additional cuts from two sessions in October 1964 with a much larger band.

The beauty of this album to me is that it captured a crucial transition in music. A time when pop was moving away from asking how much was the doggy in the window to looking for answers blowin’ in the wind. And Muddy and the blues players were right there in the thick of things--- asking questions in their own way too.
Posted by Bob Burnett at 10:06 PM