Jazz on a Summer's Day

Bob Burnett: I have a Roku box connected to my TV. If you have one, you know how great it can be. If you don't, I suggest getting one; especially if you have Netflix. A Roku box allows you to play Netflix-based films via your computer's internet connection as well as a number of other options. (MLB TV for baseball games, Amazon pay per view rentals, Pandora for music as a few examples) For the most part, I use Roku to watch documentary films and once screened remove it from my queue. I rarely go back and re-watch films--except for one: Jazz on a Summer's Day--a visual tapestry of the 1958 Newport Jazz Festival in newpoer, Rhode Island. It resides permanently in my queue. Summer's Day is in theory a "music film" about the performances that took place at Newport but for me it offers much more. For one thing it's done in film verite--the "fly on the wall" technique (in this case the "cats in the crowd" technique) where the cameras capture the events, the people, the place and let the pictures and the music performances carry it. No interviews, no descriptions just pure moment in time perfection. The performers offer a wide range of possibility too: chamber jazz (The Jimmy Giuffre Trio onstage, The Chico Hamilton Quintet late one sweaty evening in a small room someplace) contemporary (Thelonious Monk with Roy Haynes and the recently re-discovered Henry Grimes, Gerry Mulligan w/ Art Farmer) classic (Louis Armstrong and Jack Teagarden, Big Maybelle belting blues, Chuck Berry playing rock'nroll--and fitting right in) 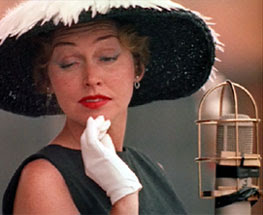 One performance in particular steals the show for me: Anita O'Day. She performs a slow, percolating and beautifully scattered version of Sweet Georgia Brown as well as creates bopspeak prosody with her playful version of Tea For Two. She hits the stage (as legend goes ripped on heroin) in a black dress, white heels and gloves and an incredible lampshade of a hat--a favorite moment is when she delicately goes up the steps and the visuals cut-away to a guy popping his head up from the stage in a puzzled double-take.

As important as the stage is to the film the audience and general festivity shots take it to another level. The clothes, the expressions, the moments of ecstasy and boredom, people eating, smoking, drinking---and living passionately. The people create their own performance in this beautifully captured moment by moment ballet.

In addition to the music and people there are shots from the America's Cup yacht race happening just offshore as well as the common thread of a roaming-throughout-Newport Dixieland band made up of Yale students--including the young trombonist Roswell Rudd.

The film was directed by noted commercial and fashion photographer Bert Stern. I looked up getting a high quality copy on DVD however I was troubled to see it's either out of print or very expensive used. The Netflix version, while being an exemplary viewing experience, is rather lacking in quality. The copy is highly compressed and the transfer from film wasn't done with loving care. That said, in 1999 Jazz on a Summer's Day was selected for preservation by the National Film Registry by the Library of Congress. That fact at least gives me hope there's the possibility for a nice copy being available in the future.