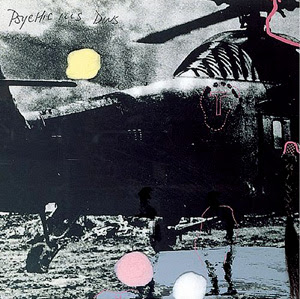 Kim Kirkpatrick: Psychic Ills is a Brooklyn-based band with a musical style that fuses psychedelic, post rock, and tribal sounds into a dense, mesmerizing sound. Dins is their first full length CD, released (and purchased by me) in 2006, but only opened this year*. I find it fits comfortably within my varied musical taste.

My interest in rock/pop started with The Beatles and I was in my prime teenage listening years during the psychedelic period of rock music. Given my decades of listening, I am critical and dismissive of music I find inferior to that which came before it. Contemporary bands lauded as “psychedelic,” for instance, I usually find to be lacking or superficial. Happily, Psychic Ills is not such a band, and they connect with so much more then just the ‘sixties, “mind-blowing” experience.

Dins can be linked to such 'sixties bands as Quicksilver Messenger Service, United States of America, Ultimate Spinach, West Coast Pop Art Experimental Band, Thirteenth Floor Elevators, and The Velvet Underground (of course), to name a few. In particular I appreciate Psychic Ill’s Eastern influence-the droning and the snake-like guitar playing. This influence was a big part of the 'sixties sound and it is still appealing to me. Psychic Ills nails the feeling and drops in a bit of reverberating Surf (The Mermen come to mind) for extra effect. Coming up a few more years, Psychic Ills connect with many a favorite band: Popul Vuh, Can (including the vocals), Neu, early Kraftwerk, etc. Bands big on atmosphere, expansive songs, with purposeful repetition. Psychic Ills share with these bands a strong, driving, tribal percussion, capable of inducing a night of dancing (be it Grateful Dead- or Rave-related for the listener). Dins shows off the band's sharp edge and free playing, relatable to early Sonic Youth, Spacemen 3, My Bloody Valentine, and Yo La Tengo at their live best.

Psychic Ill’s Dins is a release I can put on repeat and enjoy for numerous plays, never sure where I am at any particular moment but not wanting to leave either. It is a complete release, functioning best as a whole, and speaks well of the band’s direction and skills. In addition to Dins they also have a CD out of early singles called Early Violence. Both are on the Brooklyn-based label Social Registry and are available on vinyl.

*I have always liked to have music squirreled away I have not heard, though the backlog can get ridiculous at times.
Posted by Mike Johnston at 9:54 AM