Mike Johnston: Regular readers will remember my efforts to improve my computer sound system, reported in an article called "The Moo-Fubar," from January 3rd of this year. Well, the folks at Audiophile Products, U.S. importers of the various wacky mini-components from Australia's Firestone Audio, discovered the review, liked it, and sent me (for free! Woo-hoo! A veritable perk! Years of online writing pay off at long last!) Firestone's "Supplier." 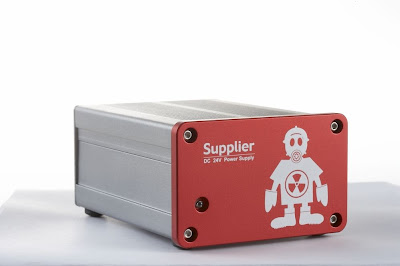 Supplier is simply an upgraded power supply for the Firestone Audio Fubar III USB DAC / headphone amp unit. It replaces the wall-wart power supply that comes stock with the Fubar III. It can also be used with most of the other Firestone components.

It takes about eight seconds to plug it in—there's no mystery to how to do it, no need to refer to the instructions that come with it.

It also takes no skill or subtlety whatsoever to hear the immediate and obvious improvement it makes in the sound quality. My immediate reaction was simply: "wow."

Of course, all it's really doing is allowing the Fubar III to strut its stuff unimpeded; but without the Supplier, you're only hearing the shadow of how good the Fubar III really is. The illusion, though, once you add it, is that Supplier is doing all the heavy lifting, which makes the little red-faced box with the radioactive warrior on the front seem like magic.

The longer I muck about in audio, the more convinced I am that electricity is the source of all improvement. Indeed, one way to look at the history of high-end audio is to see it merely as a continual process of adding bigger, better, and cleaner power supplies to hi-fi components. There was more to it than that, but that's one way to boil it down.

The Supplier makes a huge difference in the Moo-Fubar sound—greatly increased clarity and presence, immediacy, detail, image focus and size, timbre differences between instruments, impact and percussiveness of drums. Ensemble jazz is definitely back in the picture. Generally just makes the music sound so much more alive and vivid. I've spent day after day listening to album after album, awash in lovely sound.

Mostly—through the NHT Pro M-00's, at least, which are acoustic suspension (!) powered speakers—where the Supplier makes perhaps the most difference is with drums. Tuning, impact, leading edges, decays, from the delicacy of the high hat to the impactful thwack of a bass drum. The whole drum kit—especially on good recordings, but even on not-so-good ones—just comes into its own.

Detail is greatly improved. The Moos are still warm, rich-sounding little speakers, but the Supplier lets the Fubar open up the mix. You hear much more of what's going on.

Timbre and texture is a dramatic improvement, and makes different instruments sound so much more like themselves. Instruments suddenly seem to have individual character. From the astringent, articulated bass lines on Slint's "Darlene" (from "Tweez"), to the rolling, vamping solo sax on Sonny Rollins's "It Could Happen to You" (off "The Sound of Sonny"), the sounds just pull you in like a magnet.

Nothing's perfect—sometimes fortissimos can have an edgy hardness with the volume up, and sometimes I think these electronics mess with the balance of the mix a little. But that's probably because they let you hear so much of it—something that's veiled through lesser gear is exposed. These are minor faults.

The illusion of space and the position of instruments is much better, too. Hey, it's a computer system—it's not going to sound like a full-sized stereo rig. But you can follow complex musical arguments much more easily when you can hear all the instruments and differentiate them from each other. Andrew Hill just got a lot more enjoyable.

Overall what I think this new box does is it takes the computer sound from "almost good enough" to "better than good enough," a swing across a narrow but crucial juncture. After two months with the M-00 speakers and the Fubar III, I'd gotten used to its sound. I think we tend to get accustomed to any kind of sound if it's what we happen to have to listen to. It's just that bad sound quality (like I have in my car) sometimes obtrudes with reminders of just how bad it is (and doesn't let you really hear the music—which is okay in the car, I guess, since I already know by heart 98% of what they play on local radio). Decent, middling sound quality is mainly good enough but can still be somewhat fatiguing, so every now and then you find yourself turning the music down or off just to get a rest from it. Really good sound you get used to as well, but there are constant obtrusions of delight: something sounds just so rich and scrumptious that it calls attention to the pure gorgeousness of its sound quality and makes you really concentrate on what the musicians are doing. And if it's also sufficiently transparent, neutral, and accurate, you just don't get tired of listening to it. The music keeps calling me away from my work. The sound quality is whispering, "Yo, listen to this." Familiar old records are a profusion of tumbling delights, one following another.

Again, the Fubar III gets a lot of the credit. But that's where I am with the Fubar III with the Supplier power supply. As far as USB DAC units to replace your computer's soundcard are concerned, there might be better units out there—there should be, theoretically, since you can spends thousands of dollars on some of them. But the Fubar III/Supplier is just very, very good. Buy them together, or buy the Fubar III first and then add a Supplier later. (Actually, the latter appeals to me, because then you'll find out just how much difference the power supply makes—and then you'll be just as delighted as I am.) If you have, or want, a Fubar III, the Supplier is not just highly recommended: get it sooner or get it later, but it's truly a mandatory option.

Thanks to Todd B. at Audio Products
Posted by Mike Johnston at 8:01 AM