Let me 'splain: like a lot of other guys of my generation, I have a stereo. (Stereos were cool to have when we were young and rock was king.) Mine's a stack of gear bought over a period of years, on a rack, flanked by a couple of British audiophile speakers. (Tannoys continue to rule, even if Britannia doesn't any more.)

The gear is esoteric partly because it was chosen idiosyncratically and partially because it's badly mismatched: two of the power cords, I'm fond of pointing out, cost more than the amplification did, which is nuts, and so there. At the top of the pile sits a magnificent, gleaming, burnished turntable that doesn't, um, work.

But except for the turntable, it all sounds pretty great. I've been meaning to get that 'table up and running again, I really have been. Item 211 on the expandable but unshrinkable to-do list, and sinking.

A couple of months ago, however, I realized that I do most of my listening sitting at the computer. The "big rig" sits silent most of the time.

I'm a photographer, and I used to do a lot of music listening in the darkroom. Nowadays the darkroom is silent too. That's because nowadays things are newfangled and you have to sit at a monitor editing and processing images. And, like the darkroom, this provides an opportunity to listen to music. An opportunity that really should not go to waste. Advantage of computer listening over darkroom listening: no whitish burble of running water in the background masking subtle sonic details. Disadvantage: no dancing. Most people don't know this, but darkrooms are to dancing what shower stalls are to singing. There; the darkroom printer's secret is out. It's no wonder I never get any exercise any more.

The other disadvantage, of course, is that computer speakers are to my big Generation Jones audiophile rig what a spindly green eco-vehicle that runs on corn and sunlight is to a fire-breathing big-block V8.

At any rate, I had been thinking about bringing the sonic competence of my computer rig up to somewhere in the same ballpark as the Rube-Goldbergian soundshow machine at the other end of the room.

That was the concept. What follows is execution. 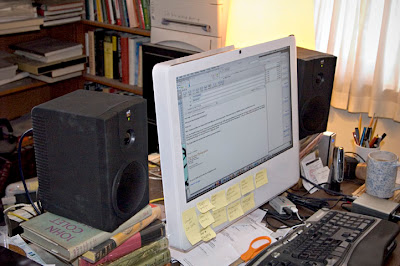 Powered speakers on custom stands. Image processed
so you can see the fingerprints all over 'em. Er, oops...
First step: buy some powered speakers
It turns out that a computer file is a pretty great way to store music, as millions of iPod users have discovered with their MP3 and MP4 files. I use Apple lossless when I can. But the computer doesn't have much power to spare for driving a pair of speakers, which is why most computer speakers are eentsy weenie little toys like my outgoing Creative iTrigue 2200s. The first step, therefore, is to give your computer speakers some amplification muscle, which I accomplished by buying powered speakers. I did some research and ended up choosing the NHT Pro M-00, one of my two top contenders, mainly because I found a new, boxed pair on eBay for $290. I think that was a genuine deal; retail is $800, and most pairs on eBay seem to go for $399 or so. The other top contender that you might want to look at is the Audioengine, which comes in two flavors, small (the 5) and smaller (the 2). Note that the Audioengine speakers have different connectivity than the M-00's, so you're on your own there.

The M-00—those are actually two zeros—is fondly known to its partisans as the "Moo," as in the sound a cow makes. Are you old enough to remember what they used to call "The JBL sound" or "the California sound"? Thick 'n' rich 'n' beefy 'n' tasty? That's sort of the gestalt of these speakers plugged straight into the computer. I bought Lee Morgan's "Expoobident"* from emusic.com—emusic provides LAME-encoded MP3s—and the 1960 sound was thin and hard to listen to. The Moos speakers made it listenable. However sometimes things got pretty mid-bassy and congested sounding. For instance, one of the first things I listened to was King Tubby, and with the Moos his music lived up to his name. 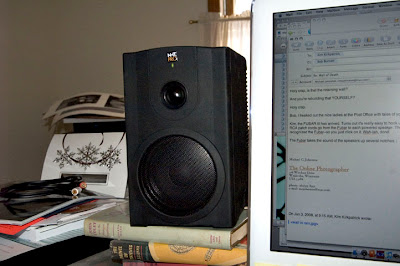 Moo!
The other problem with computer sound is that something has to provide the electronics for turning the bit 'n' bytes of the music file into an electrical signal the speakers can understand. Most computers have "soundcards" for this purpose. Soundcards have come way up in the world since my first c. 1984 Macintosh, mainly so they can provide better sound for gamers—you can actually buy fancy aftermarket soundcards now, some of which are pretty good—but for the most part you're still dealing with rudimentary circuitry that's essentially an afterthought to all the rest of the computer's circuitry, and that has to function in the interference-laden RFI soup of the computer's interior.

Enter the USB DAC. "DAC" stands for digital-to-analogue converter, or the circuitry needed to turn the digital music file into a music signal to send to the speakers. "USB" simply signifies that instead of using a cable with a 1/8th" headphone jack on one end and standard RCA connectors on the other, to plug the speakers into the computer's headphone jack, you connect the new DAC to the computer via the common and ubiquitous USB interface. 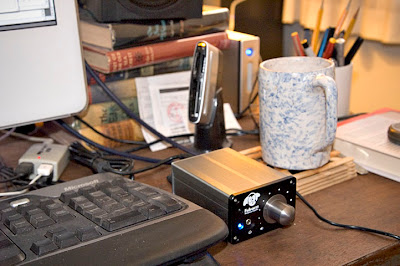 The Fubar in situ. Coffee mug artfully added to indicate scale.
There are many USB DACs, and a discussion of all the alternatives goes well beyond the scope of this little article. For two reasons, I chose the Firestone Fubar III, made in Oz, which I bought from Audiophile Products. "Fubar" is of course an acronym for "fucked up beyond all recognition," which doesn't on the surface seem like a promising name for an audio component, but then, as I've been saying, I'm no longer hip and maybe I just don't understand. I chose the Fubar for its simplicity. And its reasonable $229 pricetag. It uses the drivers already in the Mac—PCs too—so I don't have to worry about loading a custom one. That was one of its advantages, to me, since I'm a bit of a computer cretin.

It's really easy to hook up. USB cable goes between the computer and the Fubar (fortunately, the Fubar III works from a USB hub; I never have enough USB ports), Fubar plugs into the wall, two regular RCA patch cords, a.k.a. interconnects, go from the Fubar to each powered speaker. Then you just go into System Preferences –> Sound –> Output, where the system will have already recognized the Fubar—so you just click on it. Wah-lah, as they say in Fronsay. 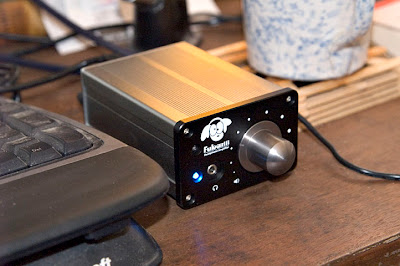 The second reason for this choice is that the Fubar III, being essentially a headphone amp (with an itty-bitty 1/8"-pin jack, for Walkman/iPod-style 'phones! Kids these days), has a volume pot. "Pot" is cool audio-speak for potentiometer. It means "knob."

Turns out that in the world of powered speakers and USB DACs, volume control is something of a sticking point. Some USB DACs, including the boss Stello DA100 I intially lusted after, or the reportedly even better PS Audio Digital Link III, are intended to feed preamps, and don't have volume knobs. You cannot run the Stello in between the computer and a pair of powered speakers, for instance, because there would be no way to control the volume. For that you need a whole 'nuther component, which Stello also helpfully sells. Several manufacturers (classically Creek Audio, but now also including NHT) make outboard, single-box volume pots, which can be used to redress the lack of same on the DAC of your choice, although that seems a waste of a good pair of interconnects to me. But then, ya gotta do what ya gotta do.

What about the SOUND? 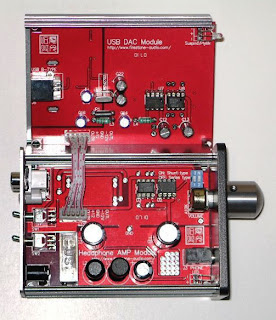 The Fubar takes the sound of the speakers up several notches. Clearer, smoother, more detailed, punchier. I would say we've gone from the high end of low-fi (lofi = boomboxes, radios, stock car stereos) to the middle of mid-fi ( = rack systems, headphones, budget audiophile). I'm still not entirely sure about the speakers—they're very warm and punchy, with plenty of boxy coloration, probably pulling that old LS3/5a boosted mid-bass trick to make the bass seem fuller. The old "JBL sound," in the near field. I'm probably sitting too close to them and they're probably a bit too far apart. Both unavoidable, due to the size and siting of the computer. The Moos are still a bit thick, congested, treble a tad grainy on some vocals. Sounds like a good custom car stereo—rich, dynamic, musical, if not particularly accurate.

But there's one thing this rig does: it rocks. No I do not mean that in any metaphorical dude-it-rocks adolescent synonym-for-approval kind of way. I mean it ROCKS. It burns most computer speakers so badly it leaves 'em in little smoking heaps of ash. Cranked up it is clean and percussively punchy, dynamic, rich, thumpin', bitchin'. Exciting. I am going to do a lot more listening LOUD with this setup, I predict. It might even change the sort of music I prefer to listen to...as most new stereos do for me. I have a feeling ensemble jazz will be de-emphasized somewhat in my listening diet and I'll be getting back in touch with mainstream AOR.

Closing arguments
Where from here? One of my treasured components in the historical big rig is a prototype PS Audio P300 power conditioner/regenerator. I was one of the beta testers for PS Audio when that was a new product (heck, the P300 was a new product category), and Paul McGowan generously let me keep it (probably because he foresaw the difficulty of getting it back: think back to the Siege of Waco). I'm going to remove that from the main system and plug the computer, the two Moos, and the Fubar into it. I expect that will clear up the residual mains hash I can sometimes hear through the Moos when they're not playing music. At that point I'll sell off the component parts of the old floorstanding end-of-the-room system (gulp) and make the transition to the 21st century entirely.

All told, my foray into improving my computer's music-making ability cost me $553.97, putting it solidly at the budget end of such enterprises—you can spend a whole lot more on a USB DAC if you want to. The sale of the old system will more than cover the cost. I'd rate the sound at a solid 7, which is good, although maybe the Moos are on the low side of seven and the Fubar on the high side. I quite like the Fubar III: it's simple, clean, well-made, and provides a very obvious step up from the iMac's soundcard, and it's easy to install and use.


*The term "expoobident," apart from being a wicked good Lee Morgan album, was coined by jazz vocalist-philosopher Babs Gonzalez in the late 1950s as an all-purpose noun-adjective-verb implying the most positive description possible.

UPDATE: See my report about the "Supplier" power supply upgrade for the Fubar III here.
Posted by Mike Johnston at 3:59 PM