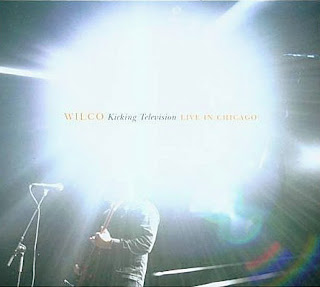 I know this album was recorded as a homecoming of sorts for Chicago-based Wilco when they played over several nights in the Windy City. It's a shame that such a tight, well performed effort had to include so much audience participation; there is whistling, woo-hoos, shouts, and parrot-like yelping responses whenever something happens that makes this disposable dixie-cup drinking audience feel like they have permission to yammer along. It's not as if singer-guitarist-frontman Jeff Tweedy is egging this sort of thing on—in fact I think he's incredibly diplomatic in dealing with the situation.

With that said, and if you can hear your way past the distractions, then check this album out. Wilco happens to be practically my favorite rock band going; tight, creative, adventurous, exploring, and engaging, to pin some descriptions on them. I've already written favorably about two Wilco-member solo projects (Glenn Kotche and Nels Cline), and I figured in anticipation of a new Wilco studio album soon to be released, I'd better write about this one before it gets lost in the shuffle.

As I mentioned before in the C60 Kotche review, the inclusion of Kotche, Cline and other members multi-instrumentalist Pat Sansone and pianist Mikael Jorgenson to the core of Jeff Tweedy and John Stirratt has lifted Wilco to a new level. This album spans songs from the band's 10+ year career and makes older songs (for example "Via Chicago") sound very current. I know it's sacrilege to praise the newer iteration of the band which to some diehards seemingly infers a loss of sight of the inspired alt-country roots the band started with—but I'll risk a conflict and take their Yankee Hotel Foxtrot and beyond body of work any day—in fact this album features a lot of material from their last two albums (YHF and A Ghost is Born). Both of those albums have moments of layered complexity and on this album the band is able to tap into the beauty of the originally recorded versions and play them live in a way that expands their scope.

I have to think the key to this intense live sound is Nels Cline, whose riveting guitar flames and flurries all over the place. Just listen to "Hell is Chrome" and tap into his rocket launch guitar solo for an example of what he means to Wilco. And of course....as soon as the song ends someone shouts "Kansas City!!!" To which Tweedy replies,"Thanks for coming from Kansas City...now be quiet!" And the band plays on...with "Handshake Drugs" to a shrill whistle greeting just so certain special people in the audience can let the band know they know the song, or some other "lookit me!" motivation. By the way, after Nels takes the rocketship solo on "Hell is Chrome" he goes pure stratosphere on "Handshake Drugs."

Although the crowd sounds make this album challenging, it is ultimately a rewarding experience thanks to Wilco's patient and skilled professionalism.