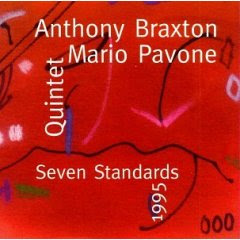 Bob Burnett: I offer a special c60 moment to recognize an album ranked past the 300,000th place in popularity on Amazon but is way up my list in listening vitality. Anthony Braxton/Mario Pavone Quintet: Seven Standards 1995 is a look back at the past but play to the future hoot of a time. This band winds its way through a range of choice covers--Thelonious Monk's "Eronel", Charlie Parker's "Dewey Square", John Coltrane's "Straight Street" as well as classic ballads such as "Autumn in New York" and "The End of a Love Affair". Anthony Braxton, the MacArthur "genius grant" winning composer/reed instrumentalist plays on this one--but as the pianist. That's right, piano; an instrument he isn't particularly known for playing. Starting in the mid-'90s he began recording several sets and variations (solo and group) of very interesting albums featuring him on piano. On this particular album he plays along as a fairly straight-forward comp guy in support of the other instruments only to suddenly veer off on rolling, blocky chunks of sound.

Anthony Braxton with Bruce Lee Gallanter--owner of one of the world's finest cd and album stores, Downtown Music Gallery (NYC)
That's the Braxton I know and love--rooted in a strong awareness of the jazz past but absorbed by the wide open range of possibility creative playing offers to constantly extend and evolve music. Braxton, known mainly for his "ghost trance" style of avant playing as well as 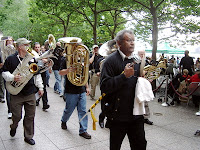 far-reaching compositions, operas and improvisations is actually a jazz history junky and a lifelong record bin scavenger; he can talk at length and with much awe about players such as saxophonist Warne Marsh and has released a variety of incredible volumes of standards albums over the years. 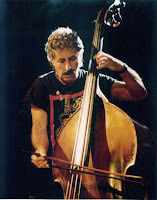 The other name on this album's title is Mario Pavone, a bassist who has been in the limelight of contemporary playing for decades. His professional music career began in earnest in 1967; he attended John Coltrane's funeral, immediately quit his day job as an industrial engineer and never looked back.

One sad aspect of this album is that it also features multi-reed player Thomas Chapin (alto saxophone, flute, piccolo). Thomas Chapin is why I wanted to bring this album to your attention. March 7, 2007 would have been his 50th birthday; he tragically died of leukemia just past his 41st birthday in 1998. His playing was lightning-fast, exacting, creative and advanced the possibility of reed instruments. He was in the forefront of the "next generation" of reed players rooted in New York City's "downtown" scene as well as a keeper of the jazz traditions of the preceding generations--he served a stint as Lionel Hampton's musical director. He began playing with Mario Pavone in 1980 and along with Michael Sarin on drums made up the Thomas Chapin Trio, a formidable group throughout the '80s and '90s. His playing on this album exemplifies his unbridaled skill and alone is worth the price of the cd. Just this month a special tribute webpage has gone up that offers information about Chapin's life and musical history as well as an abundance of music clips from his wide range of releases. I highly suggest you take a moment and check it out.
Rounding out the ensemble is current trumpet bright star Dave Douglas (Masada and several highly regarded solo efforts ) and the legendary Pheroan Ak-Laff (Henry Threadgill, Wadada Leo Smith and many others) on drums.
Sometimes the popular ranking doesn't come close to holding the special energy an album offers. This album is such an example. Plus, it offers a glance into the playing of Thomas Chapin and what a tragedy it was that we lost such a talent so young.
Posted by Bob Burnett at 6:40 AM