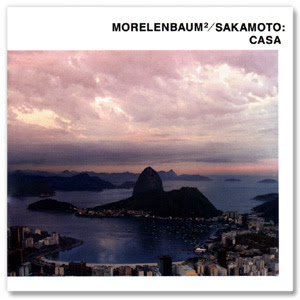 Bob Burnett: I touched on Antonio Carlos Jobim once before when writing about his duet album with Frank Sinatra as my favorite Sinatra album. Well, here's a little more Tom Jobim-related music for c60. I've recently discovered another album that deserves notice not just because of its loving and gorgeous take on Jobim's music, but because of the unique circumstances in which it was recorded.

Vocalist Paula and cellist Jaques Morelenbaum (husband and wife co-founders of Quarteto Jobim-Morelenbaum) and filmscore composer and keyboardist Ryuichi Sakamoto had worked together for more than ten years. After Sakamoto and Jaques Morelenbaum wrapped-up a tour in support of Sakamoto's release BTTB, vocalist Paula joined them in the lobby of London's Great Eastern Hotel in July 2000 and the trio gravitated towards an impromptu jam session of Antonio Carlos Jobim's music. This got the ball rolling for the three to begin earnest discussions about making a collective dream come true; an album of Jobim covers--but not just done anyplace. The three pursued recording the music in the late composer's Rio de Janeiro home, where his own piano could become part of the recording.

"Casa", the Portuguese word for "house", is the result and it is a wonderful audio documentary; beautifully executed and recorded. I discovered this album when a friend sent me a link on youtube to a rather rough, homemade looking video of the song "O Grande Amor". I was immediately struck by the simple and haunting rendition of the song and proceeded to spend the better part of my Christmas vacation humming the addictive melody line and saying to myself "I'm really going to have to buy that album when I get home". I was also further taken to discover via the video that the album was recorded in Jobim's wonderful Rio home. 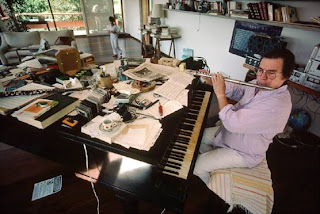 I recognized the home because of a photograph I had once seen of Jobim, at the piano bench with a flute, while with his young son wanders in the background. I always appreciated the simple and open feel of that home; it looks like Jobim's music sounds--contemporary yet comfortable, simple, elegant and filled with joy.

Just like the Jobim home, "Casa" is a contemplative joy to experience. The renditions of the songs--some familiar and some rarities--benefit greatly from the elegant timbre the piano, cello and rich vocals bring to the music. I never would have thought of Sakamoto as such an amazing interpreter of songs like these given his Oscar and Grammy award-winning work in film soundtracks and rather complex "Neo-Geo" electronic-based compositions. The Morelenbaum's follow suit; Jaques' cello is a perfect lead instrument for Jobim's compositions and Paula brings the same subtle qualities Astrid Gilberto brought to the original Jobim bossa nova releases back in the late '50s. Joining the three in occasional support are percussionist Marcos Suzano, guitarist Luiz Brasil, vocalist Ed Motta, and bassist Zeca Assumpçao as well as Jobim's son Paulo on guitar.
Posted by Bob Burnett at 12:19 AM