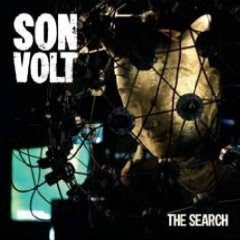 Kim Kirkpatrick: Son Volt is a band I have skirted around for years, not for any particular reason, just never got around to digging in. The band is an ongoing group exploration for Jay Farrar, who I am quite familiar with through his Uncle Tupelo* days going back to the late eighties. When Uncle Tupelo split up two new groups formed, Jay Farrar with Son Volt and Jeff Tweedy with Wilco. Jay Farrar has released several solo recordings as well as five Son Volt releases.
Like Uncle Tupelo, to some extent, and earlier Son Volt releases, The Search (2007) continues to reflect on Neil Young, and The Byrd’s country rock period. But the first “sounds like” impression I had was R.E.M. The song structures, dynamics, and Michael Stipe’s vocals and lyrics, except you can easily understand these lyrics. The songs have an interesting combination of very tight structure and a looseness of playing akin to Neil Young and Crazy Horse. The Search has lots of fine guitar work, including some nice backwards loops and soloing worthy of Neil’s “head in the clouds” playing. This is especially evident on the track called "Circadian Rhythms". In general the songs are catchy, and immediately enjoyable. For me this raises the question, how long will it hold up for me, and will I grow tired of it?

This initial concern is fading a bit as I get further into the textures of the songs, the use of horns, strings, piano, organ, electric bouzouki, and the diversity of guitar tones and styles. The live recording (to analog tape) is also a plus; I really like the sound and mix of this release. It has great clarity and dynamics (both within the songs and overall). The addition of Derry deBorja on various keyboards is a big part of the expansion in Son Volt’s sound. I also appreciate Dave Bryson’s understated drumming style. Finally, you know I love the guitar playing, otherwise I wouldn’t be writing this review. The guitarist, Brad Rice plays various electric guitars as well as baritone guitar, electric sitar, and makes frequent use of an e-bow.
“Slow Hearse”, the first track on The Search is an interesting, slow overture, one that sets the mood for the thirteen songs that follow. It is primarily staccato piano and Farrar singing: “Feel like driving around in a slow hearse”. The next cut, “The Picture”, erupts with horns bouncing, upbeat and is in contrast to Farrar’s cutting social observation. This CD is country, bluesy, rocking, an overall Americana commentary on our lives, right now. Not one song on The Search is about love lost, love found, love sucks, none of that!
One could make a case for plenty of soul searching on Farrar’s part but it is all focused on the greater, universal mess we are in. The more you listen to this CD the more it will mean to you, and the more you will appreciate the contributions made by the band members. Check it out, and be on the lookout for Son Volt on tour, I suspect they are best seen live. 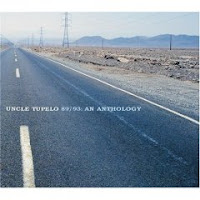 *
Uncle Tupelo is worthy of your attention, a band I really like, and an essential part of my very small country, acoustic, alternative rock, blah blah, etc., section. They have a fine anthology out called 89/93: An Anthology.
Posted by Bob Burnett at 10:44 AM