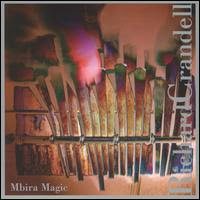 Bob Burnett: Today’s journey takes us into music rooted in the culture of Zimbabwe—via New York City’s Tzadik label by a musician who resides in Oregon. Mbira Magic is a release by Richard Crandell where he takes a modified mbira and uses it to create intricate and beautiful sound weavings. I say sound weavings because the arpeggios and currents of sound overlap, blend and evolve in patterns that sound to me like a beautiful weaving looks. 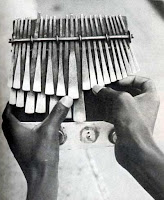 The mbira, also known as a kalimba or thumb piano, is the classic instrument of Zimbabwe. According to a great article I found (with information on a few always interesting Nonesuch Explorer Series releases featuring mbira) a mbira is made up of roughly 20 to 24 flattened metal prongs, which are fastened at one end to a wooden resonator body and is best known for its chiming, cyclical sound.

Richard Crandell is also known as a guitarist who has a technique reminiscent of fingerstyle guitar players such as John Fahey and Leo Kottke . To my ears, a deep understanding of fingerstyle guitar playing adds volumes to the scope of these mbira compositions. For Mbira Magic, he created a series of multitracks that rely on themes that feature constantly repeated phrases. There isn’t a classic beginning-middle-end progression happening within the song structures; hence this work relates somewhat to contemporary minimalism. Percussionist Cyro Baptista, who has played with everyone from Paul Simon to Derek Bailey joins Crandell to create a duet on three cuts. Baptista adds a wide swath of color to the compositions “Steelhead,” and “Bells,” and plays hand percussion on “The Island”.

There are subtle, flowing qualities within these recordings that make for a very mesmerizing listen. I found myself slowly drifting in and out of focus on the music and letting it wash into a much larger blending of sound. As I’ve mentioned before, I’m easy prey for slowly changing arpeggios in music such as Lamonte Young’s Well Tuned Piano. Mbira Magic taps into that same realm of music. Peaceful, meditative and deep. 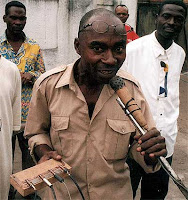 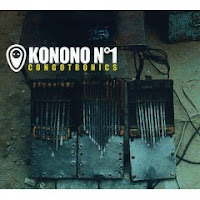 Bob: A quick add-on. A reader suggested I check out out Konono No. 1 Congotronics. Boy, am I glad I did. Man---is it HOT! It has electrified-distortion tinged mbiras, percussion, unbelievable grooves and mesmerizing carnival-like energy. Fela, Manu Dibango, Tony Allen and Mardi Gras second lines all come to mind. They play their own hand-built 'Congotronic' sound system, featuring giant mbira thumb pianos and carved wooden microphones built from scratch with old car alternator magnets.
Posted by Bob Burnett at 12:59 AM