Husky Rescue: Ghost Is Not Real 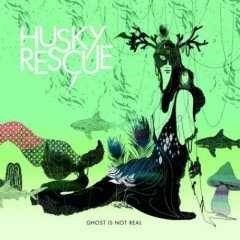 Kim Kirkpatrick: Husky Rescue is a way cool band from Helsinki, Finland. I love to fall into such pop bands with no clue what they will sound like, and then being tickled by how good they are. Gives me hope for music, keeps me (thinking I am) young, entertains me, etc. In this case their Country Falls (2004) release appeared in CDR form in my life and quickly slid into multiple play in my car. My two girls dug it, their friends dug it, I was happily scooting along to it, and all was right with my commuter world. And now I have another, new full length CD by Husky Rescue, Ghost is Not Real (2007) on Catskills Records. Yip yip, yippee! 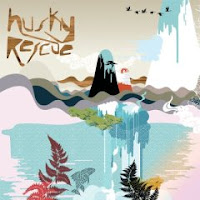 Country Falls was big on toe tapping, silly, bubbly, cinematic to the max, and generally fragile, delicate in nature. Songs with titles like, “Sweet Little Kitten”, “Summertime Cowboy” (Human League meets a Robert Fripp solo), and “Sleep Tight Tiger”. Reminds me as being kind of a blend of Lori and The Chameleons (anyone remember them?), Flash and The Pan (or them?), early eighties electro pop bands in general, mixed with early Ninja Tune releases. Whoa, can I get away with that description? Ghost Is Not Real continues the cinematic relationship, literally every song brings to mind video or movie concepts you would want to see. This new release is quite dark, full of atmosphere again, but not necessarily a safe or happy place. It is rocking by comparison, with a tougher attitude overall, and a bigger, wider sound. At times they build songs up with keyboards, guitar and drums to a point approaching early King Crimson, Pink Floyd, or Air. Then they’ll drop a Blondie style bopper on you, have they no limits? I think not.

OK, enough musical cross referencing to try and pull you into Husky Rescue. This band explores so many musical sounds, some soft, others rough, and it is all done with such smoothness that everything just sounds right.

The vocals by Reeta-Leena Korhola shift from shy little girl to ethereal, to a bluesy chanteuse seemingly effortlessly. Much of the atmosphere is created by Miika Colliander’s tonal palette on guitars, including (on both releases) a lot of pedal steel or slide work. Another principal construct for their songs is the various keyboards played by Ville Riippa.

Drop in the solid contributions from the bass player and drummer and
you have Husky Rescue’s lush, thick sound consistently carrying you through clouds, past danger, revealing their (and our) 21st Century world.
(They also have numerous remix CD EPs out which I am in the process of locating and listening to.)

Bob Burnett: After reading your review I downloaded Country Falls on emusic.com and have been really enjoying it. Glad you reviewed this--one of those never to be found on your own type bands that immediately becomes part of heavy, addictive rotation. Would be curious if any friends out there checking in from Finland can offer other suggestions of music in their part of the world.
Posted by Bob Burnett at 9:55 PM